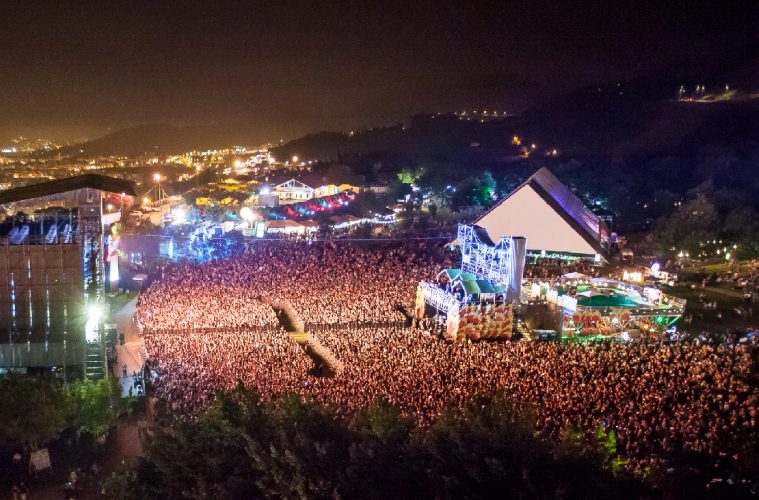 The mountain comes down to the city again in the form of Hirian, which gave the Bilbao neighborhood of Deusto a foretaste on Saturday June 15th of the festive spirit that will be felt by all at Kobetamendi on the 11th, 12th, and 13th of July during Bilbao BBK Live. Hirian, which is Basque for “in the city”, is a party in concrete, in the streets and plazas where the inhabitants of a creative, forward-thinking, social, characterful, and constantly evolving city coexist—an homage to all those people who build their city day by day, a celebration of culture and diversity and gathering point for all Bilbotars and any who wish to join in on this free cultural experience open to audiences of all ages and sensibilities.

Hirian grew out of a calling to contribute to cultural, social, and economic development in Bilbao following a sustainable event model promoting economic activity in benefit of the neighborhood that hosts it. This is why, after two years of taking place in the Bilbao La Vieja neighborhood, it’s kicking off its sojourn as an itinerant festival through the different boroughs of Bilbao in Deusto.

Hirian’s lineup is a reflection of the diversity of urban rhythms present in contemporary music. On one hand, we have bands that ride the waves of time like Surfin’ Bichos, who with their subversive, disruptive, and addictive vision of rock shook the music industry in full-on Nirvana era and are back again to relive all their hits in perfect form; or Zea Mays, who over twenty years after forming in late ‘90s Bilbao have managed to adapt to the many technological changes that have reprogrammed from the way we relate to our consumption habits and ushered in a dictatorship of ephemerality.

On the other hand are more recent acts burbling up from urban innards, such as Cruz Cafuné, a bit of an oddball within the urban scene throwing back to the sound of the Canary Island hoods, taking hip-hop classics as his cue and adding things like voicenotes; La Zowi, Franco-Spanish songstress who thanks to her raw and shameless take on things is considered the “grand matriarch of trap”, mixing her soul of a ‘raxet’ gutter minx with a deep capitalist apology in all she does; or Putochinomaricón, musician, performance artist, and producer who uses his songs as empowerment against all those who’ve oppressed him or put him down for his origins and sexual condition [sic], revealing himself to be a master of the pop anthem-cumprotest song, two apparently incompatible concepts on the surface, but territory wherein Chenta Tsai, his given name, is at home like a fish in water.

The Hirian roster is rounded up and out by young producer, vocalist, and DJ Chico Blanco; the vindicatory and feminist melange of punk and cumbia of the Kumbia Queers; La Dani’s queer vision of urban music; the irony-laced feminist garage-punk purveyed by Las Odio; the rough-riding Mambo Jambo; Bilbotar MC Mitto Koronkon; Tremenda Jauría’s riotous “cumbiaton”; and Basque singer-songwriter Sara Zozaya—not to mention an assortment of electronica assembled for the Bilbao BBK Live’s most innovative stage: Basoa. Speaking of which, Basoa in the City, Hirian’s urban forest, will host sets from Bihotza, Dave P, Juanito Jones, and Marc Piñol, a sampling of the cream of the genre.

With the support of the Bilbao City Council and Heineken®, historically committed to the musical development of Bilbao, Bilbao BBK Live has put together a session of live music in order to enjoy a festive spirit on the streets of the emblematic neighborhood of Deusto.