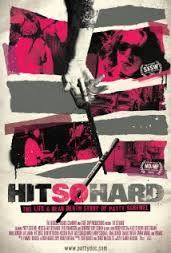 Despite few exceptions, the drummer is always the less interviewed, the less adored by the fans, the one that is rarely under the spot light.

Well, with this documentary “Hit So Hard”, the world of drummers takes a huge revenge with more than two hours dedicated to explain the life “and the nearly death” of Patty Schemel, drummer of the Hole.

Released in 2011, it covers the story of the band of Courtney Love, from the beginning till the day Patty had to give up due to drugs problems.

It is a personal view on how the things went those days, with exclusive interviews to all the band members and collaborators of that time.

Patty Schemel, that now runs her own business (http://www.dogrocker.com/about.html), is, at full title, one of the most important female drummers of the last 30 years, her contribution to the success of the band was quite important and she is still seen as an example to follow by a lot of young drummers.

Her life together with the Hole was quite “on the edge” and she could have end up death if her family and friends were not able to rescue her at the moment of need (can you believe that she was living like a homeless for a period of time?).

The movie, directed by David Ebersole and produced by Todd Hughes and Christina Soletti, it is just another piece of history of rock and roll, of Grunge era and,as well, of the Nirvana.

In fact, a lot of footage covers the story of Courtney and Kurt at the beginning of their story and the friendship between Patty and Kurt.

The name “Hit so Hard” is taken by a song included in the album “Celebrity Skin” of the Hole (even if Patty did not play any drum part in that album) and refers to her style of hitting the drums very hard.