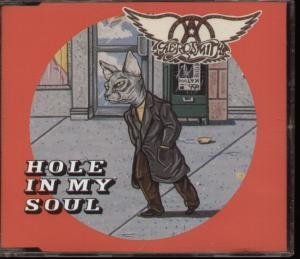 Hole in my Soul

When a song sees as protagonist, among other lyricist, Desmond Child then you can be reassured that it would be a definitive success.

It was the case with a lot of rock singers or bands like Bon Jovi, Alice Cooper, Scorpions, Cher, KISS, Steve Vai, Shakira, Ricky Martin and many more.

It was the case also with Aerosmith where the genius of Desmond met the craziness of Steven Tyler and Joe Perry.

The year is 1997 and the album is the 12th studio album of the band, named “Nine Lives” , the one that will see the song “Pink” as major success.

“Hole in my soul” is a song inspired by a man with a broken heart, that suddenly understands that there is a hole in his life previously filled by love.

He feels alone and he cannot face this failure of his relationship.

Maybe there is a bit of autobiographical history of Steven, that in 1997 will make official his divorce with his previous wife and, one year later, he will end up marrying a new one .

The music video, like all the ones of Aerosmith is very funny, there is a young student that tries to create the perfect woman in his lab, but all the time he gets rejected for another man.