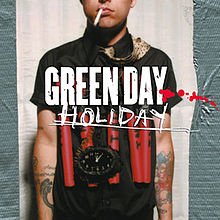 Recently we bought a special edition of “American Idiot”, an amazing album released by Green Day in 2004 that sold over 20.000.000 copies.

In the box was included a dvd that was showing the preparation of the videos “Boulevard of Broken Dreams” and “Holiday” made by the fantastic director and artist Samuel Bayer.

Out of this album Green Day created a rock opera that is still touring the world, we really suggest you to go and see the play, it is an unique experience  http://www.americanidiotthemusical.com .

The album, trough the songs tell the story of Jesus of Suburbia, an anti-hero that doesn’t like to live in his city, with his friends,  anymore and tries to escape…but, at the end, he will come back to it, he will not make it.

The music is pretty loud, a mix of punk rock,alternative and hard rock.

The 3rd single is called Holiday, as defined by the band members, a song that wanted to be “just party”…… even in the video the three Green Day are partying in the streets of L.A. with an old Cadillac.

The song talks about being rebellious , about being out of the chorus  trying to be different, try to escape the “hollow lies” that are part of our society.