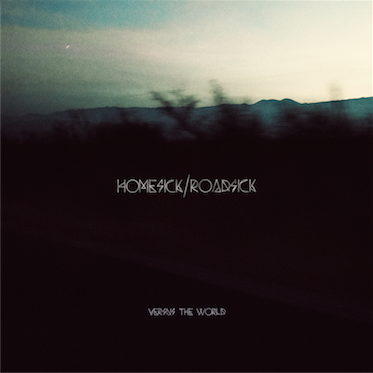 HOMESICK/ROADSICK interview with Donald Spence – VERSUS THE WORLD

RYL: “HOMESICK/ROADSICK” is the title of your new album, which was the key learning point while making it? Lyrically speaking, which was its major achievement?

VERSUS THE WORLD: We’ve put out 3 records now and every time it’s different.  The key to this record was preproduction.  For the last record we spent a pretty long amount of time in the studio, working things out, writing and arranging.

This time around we spent the months prior to recording in between my home studio in Santa Barbara and Tony’s rehearsal space in LA getting everything where we liked it.

Lyrically I’m not really sure what it achieved.  Writing lyrics is my favorite part of writing.

I like to really take my time.  It’s the part of a song that people can have a personal connection so it’s good to respect that, and really push yourself to try to express what you have to say in an honest way with out sounding pretentious or cheesy.

RYL: Among the new songs is “The Santa Margarita”….What inspired its lyrics?

VERSUS THE WORLD: Our friend Tony Sly passed away the day that our last record came out, I woke up to my phone ringing off the hook.

I figured it was friends saying they’d pick up the album but it was just the worst news ever.  His band had taken us out on a few tours when we first started and he helped us immensely.  So that song was written about that morning.

VERSUS THE WORLD: It’s written about the last two years of our lives.  We toured the last album pretty hard, we got to see Japan, China, Australia, Europe and America a few times.

We went to places I never thought I’d ever get to see.  So there’s this weird thing that happens to you when you’re gone that long.

We call it tour blues, or I started calling it homesick/roadsick.  Where you’re out on the road doing what you love and seeing new places but you start counting down days till your home.  I don’t care what band you’re in, everyone does it.

Then you get home… A few weeks go by and all you can think about is getting back on the road and playing shows.

RYL: how did you write the song “The Black Ocean” ?

VERSUS THE WORLD: I have a fear of flying.  I always have, I fucking hate it.  It just sounds like such an awful way to die.   We were flying to Japan and we were going over the ocean at night and I wrote the first lines while we were drinking wine.

I had this anxiety but it was mixed with this excitement because I’d never been to Japan before and it felt like such a big goal in my life had been met.

I love that country.  I can’t wait to get back.

VERSUS THE WORLD: I always have ideas that come to me, a quick line or a premise.  So I keep a little note book with me and I write things down as they come.

When it comes time to write the song it’s weird, I like to have a drink and then I have to take a walk to kind of clear my head and get started.

If I get stuck or distracted, I take another walk to get myself in a clear space.  So really just a little quite time and alcohol.  Ha ha!

VERSUS THE WORLD: That’s a tough question.  I don’t even know how to answer that.  I like different songs for different reasons.

RYL: When you started play your first instrument and which song you learned as first?

VERSUS THE WORLD: Oh god I don’t know… I started playing piano when I was a kid so I’m sure it wasn’t a very good song.  I remember when I first got a guitar though, I was about 12 and I was always listening to my moms records.

Day Tripper by the Beatles was the first song I learned how to play.  Super cool simple riff.  I sometimes still play that riff if I’m just plucking around on a guitar.

RYL: What “A sight for sore eyes” means for you?

VERSUS THE WORLD: That’s just kind of a song about finding a peace with being what ever it is you are.

I was inspired by an old Feederz sticker I’d seen in pictures of Kurt Cobain’s guitar that said “Vandalism.  As beautiful as a rock in a cops face.”  And I just went from there.

My mom used to protest the government in Mexico when she was a young woman in the 70’s.  Sometimes they’d get violent and protesters would clash with police.  Rocks, bottles, anything they could get their hands on.

She’s always inspired me.  All those things were inspiration.

RYL:  Tell us more about your projects of tour…

VERSUS THE WORLD: Mike and I leave next week for tour to support a solo record I released last year, then were home until the release of the record in April.  Right now were booking a U.S. tour in April-May and working out Europe in the summer.  I’d like to stay busy.

RYL:  Who is helping to produce your music?

We’ve always worked with Thom Flowers.  He’s been like a member of the band to us.

He really knows the way we work together and he and I mesh really well.  He’s been a part of every members other bands recording too so he know us all very well.