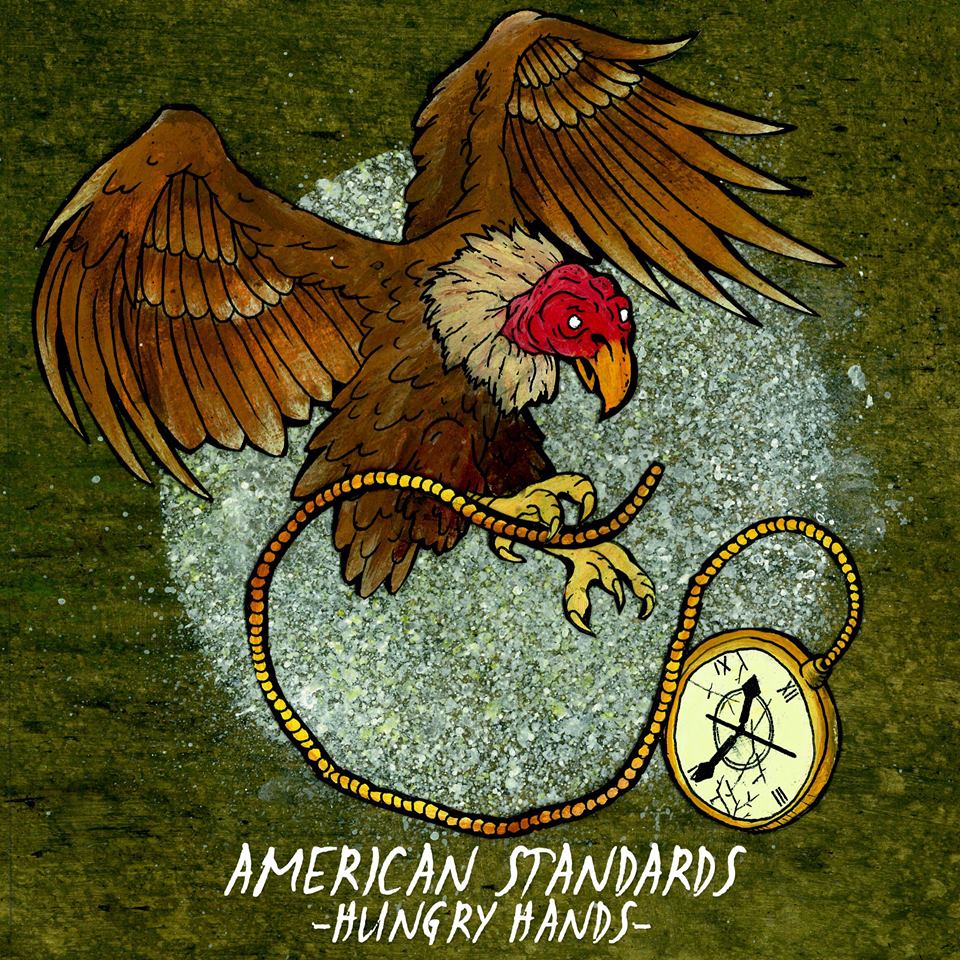 RYL: Tell us everything about your last album “hungry hands”, how was the reaction of your fans on the new songs?

American Standards:  Hungry Hands is our third release. We put it out in May of 2014 when we were real heavy into Tom Waits, 1990’s era WWF and nut shot compilations on YouTube.

It’s the first time we’ve recorded out of state and also the first time releasing on cassette and vinyl. In the spirit of trying new things, we also had the chance to do a fair share of experimentation during the recording process.

We got to play with back masking and adding some instruments outside of the normal like mandolin, banjo, tambourine and even a finely tuned wine glass. I think a lot of it blends so well that their hidden by almost all but us.

It’ll be a treat for anyone that does happen to uncover it though.

We released Hungry Hands independently and then teamed up with some regional labels to help with distribution. We’ve got Enjoyment Records in the UK, Nacion Libre in Mexico and Torn Flesh here in the states.

People haven’t outwardly said they hate the album yet so that’s a good thing, right

RYL: part of the new album is “Circus Rats”, what does it mean to you?

American Standards:  “Circus Rats” is the second track on the album but the last one we wrote. It expresses the desire to do something that will make an impression.

That will serve as your legacy. To do so, you’ve really got to push yourself and put yourself out of your comfort zone to do something original and unique.

I think a lot of people have the potential to do this but their downfall comes when they’re discouraged by everyone’s initial reaction. People don’t always like change or something new but if you stick to it, it can pay off In the long run.

Michael Jordan, the star of 1996’s blockbuster hit ‘Space Jam’ once said; “If you put in the work, the results will come.”

I’d like to believe that sometimes the true art and the true thing to admire is the work itself. The result can be a byproduct whereas the work to achieve it is what truly inspires.

American Standards:  Whether intentionally or unintentionally, there is. The songs all touch on the realization of mortality and making the conscious decision to make the most of the time we have.

At the time I had family and friends that had been going through some major health and personal issues.

One has since since passed and it really made me think more about what I want to do in the world before that time comes.

RYL:  Do you remember how the lyrics of “Casket Party” have been written?

American Standards:  I do. I was traveling at the time. We were at a bar in a small town. The kind of town that has a comer store, a diner and that one bar.

A single streetlight if your lucky. I remember thinking about everyone in the bar and how they got there. What their life stories were.

As the night went on more and more people started to sing and dance and just kind of forget whatever was waiting for them when they got home, or what they had to do the next day. Kind of the momentary escape and absence of all stress, fear, frustration.

So the song is really just about living in that moment as much as you possibly can. It’s those moments that bring you through the hard times and I to the next day.

American Standards:  It really varies. I’m constantly jotting down lines and ideas. When I’m traveling more often then not. I think I wrote the entire Death Of Rhythm And Blues EP on two 19 hour flights. I then take what I have back to the guys.

Corey our guitarist will normally have a few riffs and we’ll just build it all from there. It’s a pretty organic and low tech process.

I’ve been in bands in the past where a large portion of the writing was recording files and transferring them back and forth as the guys added their parts.

I can say that by all being in the same room working through it together you get to hear a lot more of each members individual style in the final product.

I think we’ve been doing it long enough to where we distinctly know who had the most influence in each section of the songs even looking back at the first recordings.

RYL: What is the most important thing in writing a song?

American Standards:  As simple as it sounds, the most important thing is writing a good song that you like. Too often musicians go into a song thinking they want to shred on guitar and sweep non stop, or they want this driving double bass and blast beat throughout.

That mindset really limits you. Having the ability to write a technical song is great but having the presence of mind to know when to lay back and let another instrument shine is much more important to me. Structure is key.

If at the end  you’re writing for yourself and not what others will think, you’ll do fine.

American Standards:  Longplayer. Google it. If your talking bang for your buck, this song is 14 years long and still recording.

American Standards: You know, we have a handful of new ideas but with Hungry Hands still being so fresh I don’t think we’ve nailed down anything concrete.

Lyrically I can bounce a few song names off ya though; “Rat King and the Son of God”, “Glass Bones/Paper Skin”, “Tubthumping pt.2”, “The Uniform of Rebellion and Conformity”, “American Idle”, and “The Devil and The Dark”.

RYL: Where we can see you live? Any plan of touring US?

American Standards:  Planet Earth. Actually, we have some shows coming up with Norma Jean and Night Verses. A couple west coast shows in December then hopefully another full scale tour early next year. Check the World Wide Web for all that info.