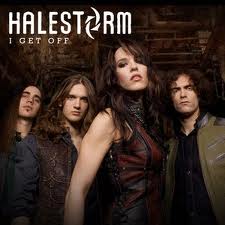 I get off – Halestorm

In 2009 the american rock band Halestorm released their first self titled album.

The lyrics of “I get off” might let you think that this song is about sex, you will be wrong (maybe)!

Lzzy Hale (the singer of the band) apparently said that the inspiration for the song was from the feeling of feeding off the energy of the crowd during a performance…it is about the energy you get performing on stage and its how the fans in the crowd get her going and the band.

What do you think?