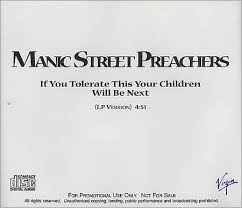 Maybe this is the most successful song of MSP, Manic Street Preachers, written in 1998 by Nick Jones (bassist), James Dean Bradfield (singer and guitarist) and Sean Moore (drummer) and released with their fifth album “This is my truth tell me yours”

The song’s lyrics are talking about the time of the Spanish civil war ( between 1936 and 1939) and  the protagonists are the welsh (like MSP) volunteers who joined the left-wing International Brigades fighting for the Spanish Republic against Francisco Franco’s military rebels.

Did you know that the title has been decided after viewing a old poster displaying a photograph of a young child killed by the Nationalists under a sky of bombers with the stark warning “If you tolerate this, your children will be next”?

Of course this is not the only meaning of this song; the verses are about honoring the past and hope for the future…. it is like MSP wanted to say that If we don’t step up for our  ideal’s and fight the wrongs in the world we will just pass away and the wrongs will move on to the next generation without change