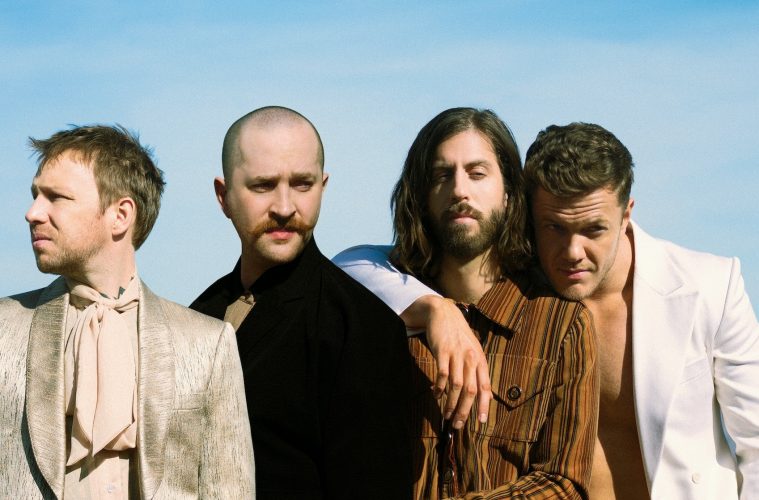 GRAMMY®-winning, multi-Platinum band Imagine Dragons have unveiled the music video for their new single “Follow You”. The video stars actors and real-life couple Rob McElhenney & Kaitlin Olson and was shot inside The Venetian Theatre at The Venetian Resort Las Vegas. The video made its global broadcast premiere on MTV Live, MTVU and across MTV’s global network of channels, as well as on the ViacomCBS Times Square billboard today.

Directed by Matt Eastin, McElhenney and Olson find themselves preparing for a surprise, private birthday concert planned by Olson for McElhenney featuring his favourite band. It doesn’t take long to uncover that she perhaps booked her favourite band before Imagine Dragons take to the stage for a performance of “Follow You” full of fantastical twists, romance, and… some bare chests.

McElhenney is the creator, executive producer and star of the cultural phenomenon ‘It’s Always Sunny in Philadelphia‘ for FXX and Mythic Quest for Apple TV+ – whose highly-anticipated second season will debut on May 7, 2021.

Olson is best known for her role on ‘It’s Always Sunny in Philadelphia.’ She has also starred in ‘The Mick,’ ‘Curb Your Enthusiasm,’ ‘Finding Dory’ and will next be seen in HBO Max’s highly anticipated Jean Smart Comedy series, “Hacks.”

“Follow You” was released March 12 via Polydor/KIDinaKORNER/Interscope. The love song was written by vocalist Dan Reynolds after getting back together and eventually re-marrying his wife after a 7-month separation a few years ago. “I wanted [the song] to represent a love that is realistic. One where love isn’t perfect, but it endures,” Reynolds said on his social media platforms ahead of the song’s release.

Imagine Dragons also released the song “Cutthroat” last Friday, a propulsive, punk-leaning anthem about killing the critic inside of you. The group recorded the song with producer Rick Rubin at his Shangri-La studio in Malibu. Stream “Cutthroat” HERE.

“Follow You” and “Cutthroat” mark the first new music from the GRAMMY®-winning, multi-Platinum band since their 2018 album ‘Origins.’

With 40 million albums and 50 million songs sold globally, as well as 60 billion combined streams, Imagine Dragons were the best-selling rock band of the 2010s, even as they were busy reinventing the genre. Billboard’s Top 3 rock songs of the decade belonged to the band – “Believer,” “Thunder” and “Radioactive.” Formed in 2009, Imagine Dragons developed a grassroots following with a series of independently released EPs before making their major label debut on KIDinaKORNER/Interscope with the 2012 EP ‘Continued Silence.’ ‘Night Visions,’ their 2012 full-length debut, entered the Billboard 200 at No. 2 and the lead-off track “Radioactive” topped Billboard’s Hot Rock Songs chart, won a GRAMMY for Best Rock Performance, and achieved RIAA Diamond status. 2015’s Smoke + Mirrors debuted at No. 1 on the Billboard 200. EVOLVE, which followed in 2017, earned a GRAMMY nomination for Best Pop Vocal Album and unleashed three No. 1 Alternative radio hits: “Believer,” the GRAMMY-nominated “Thunder” and “Whatever It Takes.” All three songs were also top 5 hits at Top 40 radio, with “Thunder” rising to the No. 1 spot. The band’s fourth album, ‘ORIGINS,’ debuted atop Billboard’s Alternative Albums and Top Rock Albums charts and lead single “Natural” spent nine weeks at No. 1 at alternative radio and set the current record for all-time “most spins in a week” at the format.