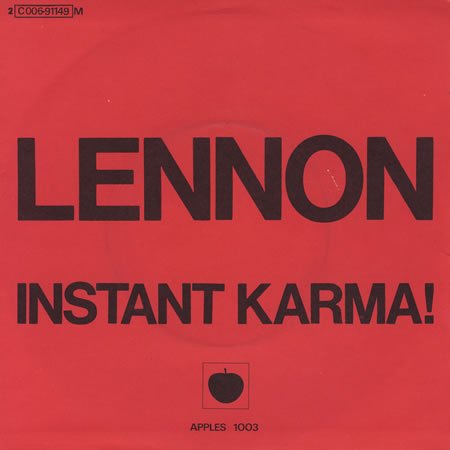 We could speak for days regarding this song, there are so many thing to say, so many interpretations , so many sources.

We could say to you that, what characterises this song is the fact that everything was quick; the writing process, the recording, the distribution and….. the sales.

In fact, these reached over 1.000.000 copies in few weeks, making it one of the most sold pop song of all times.

John Lennon, in some interviews, said : I wrote it in the morning for breakfast, recorded in the afternoon for lunch and released in the evening for dinner!

You know what is Karma right? For many is that thing the brings you back positive things if you do positive things, most probably John was exposed to it when he traveled with the Beatles in India.

The all concept of the song is about be good and be part of this world, if you will recognise it then your all life will change and turn in to a positive one!

Is maybe for this positiveness that the song (otherwise titled We All Shine On) had a huge success reaching number 1 in USA and number 3 in UK…….the year? 1970…..43 years a go!!

So, are you ready to change? Instant Karma is going to get you……SOON!!