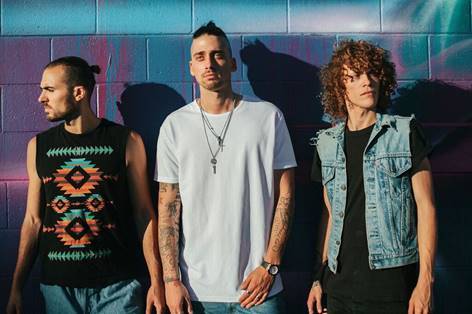 RYL: Tell us about your upcoming projects… a new album coming soon?

CHEAT CODES: We have an album in the works yes!! So far we probably have a little over 20 songs so we’re just adding to our catalogue and finding the songs which fit best for us! For now though we’re focused on releasing singles and remixes.

RYL: Let’s talk about the song “Visions”, what it means for you?

CHEAT CODES: The song Visions is about visualizing what you want and going for it. Whether that’s a love interest, a goal or dream.

We’ve found that in our own lives the more we focus on what we do want the better results we get.

CHEAT CODES: We try to be pretty open with what we write about.

Our main goal is to affect as many people as possible in a positive way with our music.

That could be as simple as making someone smile and dance, to trying to convey a universal message such as going for what you want.

CHEAT CODES: For us the song is king, meaning we like to normally base our production style around a stripped down song.

But sometimes we do make tracks first. Whatever brings out the best possible song.

CHEAT CODES: Lyrically speaking, probably Adventure because it really creates a visual for us right when we here it. Just makes me want to do something fun that we’ve never done before.

CHEAT CODES: Having fun and feeling good. We think everyone’s goal in life should be, being happy, so music makes us happy, and when we’re happy we make music.

Kind of a vicious cycle so to speak.

RYL:  Which is the best show you did so far?

CHEAT CODES: We actually haven’t performed yet so be ready for that coming soon world!!

CHEAT CODES: We just did this song with indie pop duo, “Dresses” which we’re really excited about.

Getting to incorporate different genre’s into dance music is something that we always love to do.

CHEAT CODES: We’re hoping to put together some tours this fall! So we’re pretty excited about that!

RYL: What “senses” lyrics mean to you?

CHEAT CODES: Senses is like sitting down at a five star restaurant and taking that first bite after being starving all day, or watching those fuzzy black light posters, you’re senses are picking everything up but your brain can’t quite comprehend whats happening.

When you’re with a girl or a guy and your senses are overwhelmed, it’s a solid indication that you should keep them around.

RYL: How does Los Angeles inspires you?

CHEAT CODES: The great thing about L.A. is there are so many creative people out here that just going about your normal day you might run into a fellow artist that can inspire you.

Like our next neighbors write scripts and act, for example. When you see other people as passionate for their art as you are, it really forces you to create at the highest level.