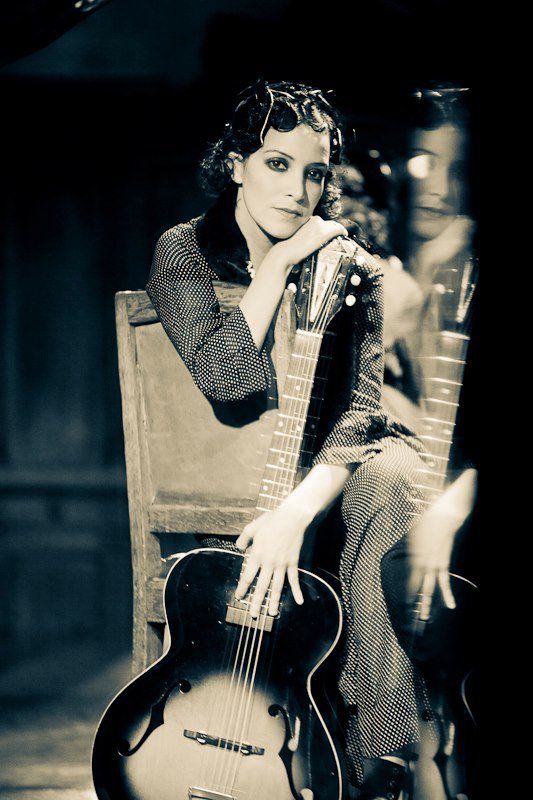 A very intimate interview with Gaby Moreno (http://www.gaby-moreno.com) about music and the meaning of the lyrics of her most famous songs.

RYL: Tell us everything about your new songs….are you preparing a new album? When do you plan it to be released?

Gaby Moreno: Yes! I am preparing a new album. At this stage, I have pretty much all the songs ready. Just trying to find a little break on my busy touring schedule to actually go in the studio and record them. I hope I can do it sometime in the summer and release it later in the fall of this year.

Gaby Moreno: Every time it’s different. Sometimes I write on my own. Other times I like collaborating with other people. But it always seems to start with a chord progression I find myself strumming on the guitar, then I add a melody and leave lyrics for last.

RYL: Which is the most difficult verse you ever wrote?

I don’t know why but I remember getting really frustrated with the chorus lyrics of my song “La Vez Que No Me Pude Atrever”. It took various attempts until I decided I was happy with them.

RYL: And the one has the most important meaning for you?

Gaby Moreno: Well I like to think they all have an important meaning, of course. My song “Ave Que Emigra” which talks about immigration and leaving behind where you are from and everything you know to go and follow your dreams. That one has a special place in my heart.

RYL: “ Que voy a hacer” is your latest song, what is behind its lyrics?

Gaby Moreno :What happened was I got insomnia for the first time ever one night. I was at the point of losing my mind at 3 am and then I grabbed my guitar and started writing that song. The lyrics frame the anger, desperation and vulnerability I was feeling.

RYL: You won the Latin Grammy as best new artist, a great honour, but also a great  responsibility…how was that night?

Gaby Moreno: It was the most magical, surreal, incredible experience! It’s very hard to describe because there were so many emotions attached to it. I was so honored and grateful. I’ve been in this business a long time, been through all the highs and lows and to finally get your work recognized…it’s priceless.

I was especially proud to stand there and dedicate the award to all my people in Guatemala.

RYL: Can you tell us about “Little Sorrow”? do you remember when you wrote its lyrics?

Gaby Moreno: I think I wrote that around 2006. I was listening to a lot of Nina Simone, and although the song may not sound like her she definitely inspired it. That happens a lot with my songs. I think they will sound a certain way, or have the mood and feeling of an artist I love, but then it comes out completely different.

Which is totally fine, because I wouldn’t want to be ripping anybody off. You just “borrow” little things here and there.

RYL: Are you going on tour soon?

Gaby Moreno: Yes I am! I am balancing two things at the moment. One is being part of Hugh Laurie’s “Copper Bottom Band”. I sing lead and background vocals, play guitar and ukelele. It’s incredibly fun. We are going to Argentina and Brasil this month and then we go to Australia and New Zealand in April.

That’s one thing. The second and most important is my own band. We have shows in London, France and Tunisia the first week of April and are planning more shows in the US and Europe for later this year.

RYL: Who inspired your music more than anybody else?

There are so many artists and genres that have inspired my singing, songwriting and playing. Early blues and jazz artists like Ella Fitzgerald and Louis Armstrong. Soul and gospel artists like Sister Rosetta Tharpe, The Staple Singers, Ray Charles and Aretha Franklin.

The Bossa Nova of Jobim. The powerful and romantic voice of Edith Piaf. 60s classic rock like The Beatles and The Kinks. 60s italian and french pop. Trio Los Panchos. Carlos Gardel. Debussy.

RYL: Tell us your favorite verse of a blues song….

It could be a spoonful of diamonds

It could be a spoonful of gold

Just a little spoon of your precious love

Would satisfy my soul