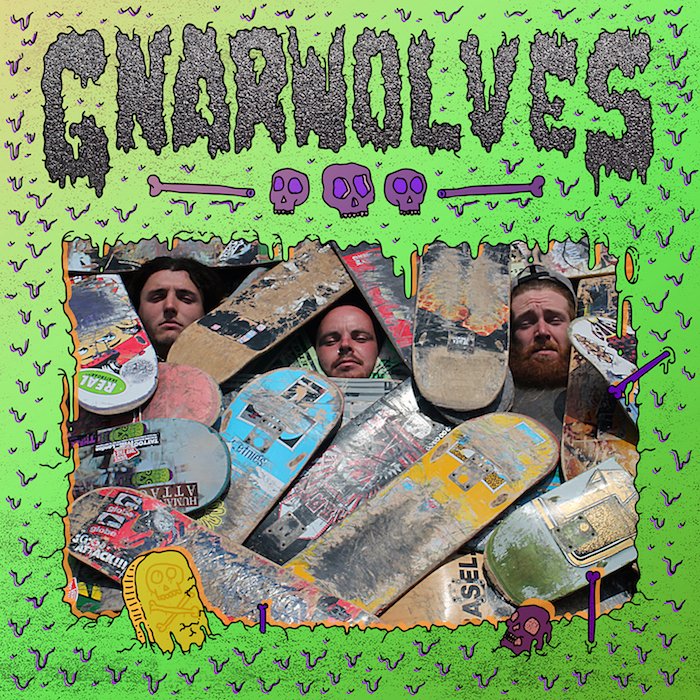 RYL: Your new album “Gnarwolves” will be released in a week, how do you plan its launch? Which was the most difficult thing you encountered in its preparation?

GNARWOLVES: We’ve never written an album before so that was definitely the biggest challenge. Writing a record that was varied but still sounded like us was a fun challenge.

RYL: Which is your favourite song (from the album) to play live?

GNARWOLVES: We’ve been playing “Hate Me” a lot recently which is really fun, but I’m excited to be able to play more of the album especially “Ebb” and “Flow”. We’ve got to play them at a couple of shows and I really like the way they build live.

GNARWOLVES: I think the record is more of a snapshot of a certain period of time than having an overarching theme. There’s songs about a lot of different things, some personal and others about excess and the way people are living today.

GNARWOLVES: They mostly come when I’m out and about personally and I think Charlie is similar. I write bits and bobs on my phone as they come to me and have a look at them when I’m near a guitar or have an idea for a melody.

Sometimes it takes me a little while to know where I’m going with my lyrics and I have to come back to it a week later with fresh eyes and end up changing everything.

RYL: Tell us everything about the song “Boneyard”

GNARWOLVES: Everything? It’s called “Boneyards” and we wrote it in February this year I think. It’s fast and goes pretty hard before stopping really abruptly.

Lyrically it’s about when I first moved back to Cornwall from Brighton and noticing how much it had changed and how I felt like I didn’t fit in anymore. After a year or so back home this incredible music scene started to appear and Cornwall was amazing. It’s about losing and finding home I guess.

RYL: One of your passions in skating… a month a go Jay Adams died, what he represented for you?

GNARWOLVES: Obviously as a person he wasn’t the best guy but he was one of the first skateboarders so he was really important in that respect. We’re all the same when we’re in the ground.

RYL: Will you be on tour soon promoting the album?

GNARWOLVES: Yeah, we head out to the USA in October with The Wonder Years, The Story So Farm and Modern Baseball in October, then play Fest. In November we’re touring Europe with Prawn and in December we tour the UK with Prawn and Public Domain. It’s gonna be a great few months!

RYL: What is the story behind the song “History is Bunk”?

GNARWOLVES: Ahhhh, I wrote this song a couple of years ago so I don’t know if I can explain it the way I did then. When I wrote it I guess I meant for it to be a song about a person that’s let you down one too many times. It’s pretty angry I guess. An “I’m sick of sticking up for you” kinda thing.

RYL: Tell us about “Smoking Kills” and what inspired it?

GNARWOLVES: I think I’d like to keep those lyrics up to interpretation. They have personal meaning to me but I wrote them to be taken ambiguously. You can take the message you want from them.