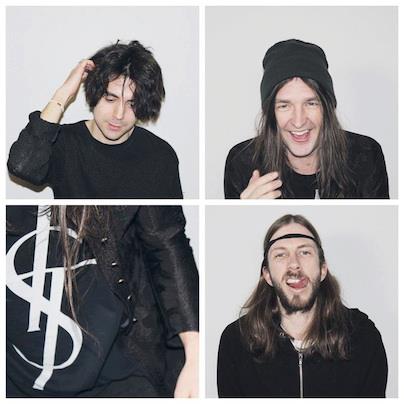 Interview with IS TROPICAL

We want to welcome our new website with an amazing interview we had with IS TROPICAL,(http://www.istropical.com/) a London-based band that will release next week its new album “I’m Leaving”.

The first single extracted from the album is already a success, due also to the virality of its fantastic music video.

We suggest you to hurry and pre-order their new album, we are sure it will be a success!

RYL: Members of the band…mmm, let’s see … we have three signs: Peace, Infinite and
Yin Yang …. How did you end up selecting them?

IT: Those were the best available symbols on the keyboard. We really wanted One Love, Jah Rastafari & EA sports!

RYL: You have also real names or it is just a secret?

RYL: We loved the pictures you did to advertise the French, UK, American and
European tours…when you guys will hit the road again?

IT: We have been doing a few dates here and there, Sweden, UK and France. And we will do a few more like Germany and Switzerland but the summer is mainly taken up by festivals. So our 2nd world tour wont start until the end of the summer.

RYL: You even stop in Mongolia! How was it?

IT: It was crazy, no body really plays Mongolia so when we went there it was very much a spectacle for them. We met some amazing people and found out a lot about their culture. Also there was around 400+ people at the show singing along!

RYL: A new album “I’m leaving” is going to be released soon, how long did it take to be
recorded in studio?

IT: We wrote the demos on the road touring and took 17 of them into the studio. It then took Luke Smith about 6 weeks to make sense of tem and produce ‘I’m Leaving’.

RYL: IS TROPICAL was created in 2009, after almost five years, which are the
achievements of your musical career?

IT: Traveling around the world is what it’s all been about! We get paid peanuts still because of how the music industry has changed. We’re not gonna start hating people for downloading our music for free, we know how it is to be poor. We’d rather be on peoples ipods and they then come to our shows.

RYL: We just love the video of “Dancing Anymore”, who is behind it? We mean…who
is behind the idea…..

IT: You will have to ask Megaforce about that, they are the brains behind the video. We also worked with them on The Greeks that went crazy viral! It’s great to have creative friends that can really impress you with a certain media.

RYL: Beautiful women are recurring in your videos, real ones like in “Lies” till the sexy
but fake of “Dancing Anymore”…… definitively the audience is enjoy looking …as
much you do making them?

IT: It’s all about pretty woman.

RYL: Lies is a song recorded as part of the album “Native to” released in 2011, what do
you remember of the days you recorded it?

IT: It was a massive learning curve. We didn’t study music or have anyone to teach us about it but we still entered a studio and decided we’d produce our own album with the amazing Jimmy Robertson. For what it was it got great reviews! But it seems so far away now.

RYL: Let’s go back to the music, you are working with Luke Smith as producer, how is
working with him? A lot of energy?

IT: We met him before the first album and we really wanted to work together but at the time he was recording The Foals. Luke wanted everything to be about the performance so he worked us to the bone, make you play the same riff for hours until you bleed. Every day was like a science lesson, we learnt so much. We’re now best buddies.

RYL: We like many of your songs, but “Yellow Teeth” is our favorite, can you tell us a
bit more about its lyrics, how did you write them? and…. why yellow teeth?

IT: Classic morbid song about we’re all gonna died alone told from the metaphor of being two werewolves, arguing with a loved one when the sun goes down. It was all quite fitting as when I sung the rough guide vocals I had just been made homeless after the girlfriend kicking us out. We ended up not recording the vocals again and just leaving the rough take.

RYL: What is behind the song “Think we are alone”?

IT: That moment when you and a girl have final been left alone.

RYL: Any surprise planned for the summer?

IT: We have big plans about touring some crazy countries in Africa and Asia… Watch this space i guess.