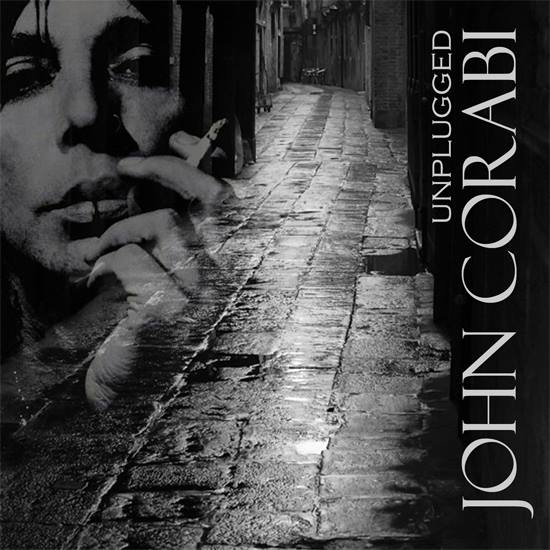 RYL: Your last “Unplugged” album…..we love it!!! From hard rock to all acoustic…. What makes you particularly proud of its release?

JOHN CORABI: Well every song I’ve ever written has been on acoustic guitar. So, it was very natural for me to do this record. I LOVE all types of music, and I wanted my first record to be a bit “different”…Doing the acoustic record allows me now to do whatever I want next…!!!

I’m very proud of the Unplugged record, and all of the guys that helped me make it!!!

RYL: Which is your favorite acoustic guitar? Which is the best you ever owned?

I also have a few Gibsons, and Epiphone acoustic guitars. I think the one that has been my “workhorse” until recently has been a Epiphone master built…That thing sounds awesome!!!

JOHN CORABI: Pretty much life in general. Some of my songs are about the women in my life, others about things I see in the news, and on occasion I’ll make shit up, but usually its all true to some extent

JOHN CORABI: I don’t have many songs that haven’t been unpublished, but there are a couple…I have one that I’d love to record called “Meet Me On The Moon”, and another I wrote called “She’s A lot Like The Woman I Love”…The latter is a bit of a country song I wrote to pitch to another artist, but it hasn’t been pitched yet…

RYL: With Motley Crue you contributed in writing several songs, which is your dearest one? It was easy to write songs with Nikki Sixx?

JOHN CORABI: Writing with the guys was very easy!!! We all wrote and contributed on the entire record!!! And my favourite is probably Misunderstood..

RYL: “Man in the Moon” is one of the favorite songs from the “Unplugged” album, according to Itunes charts, why in your opinion?

JOHN CORABI: I just think its because the Scream was such a great band!!! We were really starting to open a lot of eyes, when I left to do the Motley gig. And since then the Scream record is nearly impossible to obtain…so maybe thats it!!!

JOHN CORABI: Probably the best gig I’ve ever done is the Livestock festival in Zephyr Hills, Florida with the Scream, and the best show I’ve ever seen was Queen in Philadelphia as a kid…Saw them 5 times, and they were AMAZING every time!!!! LONG LIVE FREDDIE!!!!

JOHN CORABI: Right now I’m so fucking busy!!! I’ve been writing for a new John Corabi electric record, doing shows with my solo band, (we’re doing the Motley 94 record in its entirety) and I’ve also been a part of the band The Dead Daisies, and we (the dead daisies) just finished a record thats coming out in Europe May 29th, and we’re touring Europe with Kiss in June…

RYL: What the words of “Are you waiting” mean for you?

JOHN CORABI: I wrote that song a long time ago, when I was in a band called Angora. Its just about missing someone at home while you’re out on the road which, can be very difficult!!!!

JOHN CORABI: My pleasure in music, is that I’m actually STILL able to do music. I’ve been very blessed to be able to travel and play for people, that still care and believe in what I’m doing!!!

RYL: Which is the craziest thing you did in your life  (musically speaking)?

JOHN CORABI: Well, there’s probably a lot that should remain unsaid, but I think the craziest thing that’s ever happened to me BECAUSE of music, was meeting and having a bit of a “kissing moment” with Sandra Bullock!!!!

Met her with Tommy Lee when she was filming Demolition man with Sylvester Stallone. Tommy and I went to meet Sly, and wound up in Sandra’s trailer with her and Dennis  Leary. Tommy and Dennis left to go “save the world”, and I wound up hanging with Sandra.

She hadn’t done the movie Speed yet, so she wasn’t as famous as she is now, but we spent the night talking, watching her film, and just basically kidding around!!!

She has an incredible sense of humor, and I STILL get a little twinkle when I see her on the screen…aaaahhh what could have been….!!!!