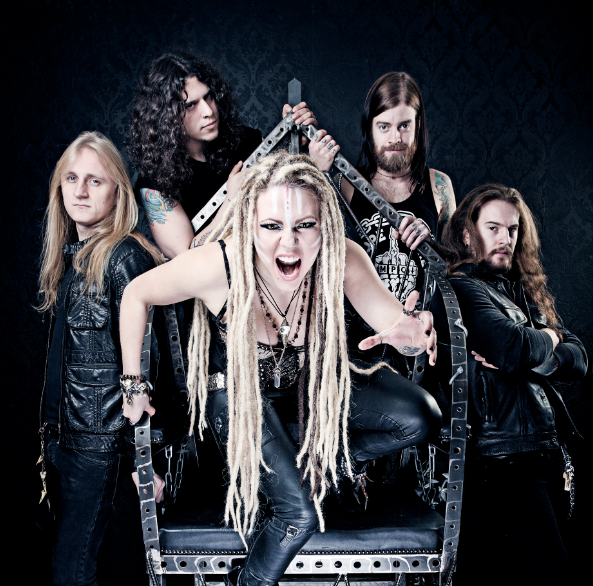 Interview with Kobra And The Lotus

Have you seen already Kobra and The Lotus live? If the answer is no, then we suggest you to do two things….. go on their website (http://www.kobraandthelotus.com) and purchase one (or more!) ticket for their shows for the american leg of their tour.

We are sure you will enjoy it a lot, as we did enjoy having this very special interview about their songs and plans for the future.

RYL: We see you guys very busy on tour, how is it going so far?

KATL:This tour has been killer!! Hate Eternal and Fear Factory are wicked people with wicked crews which makes the camaraderie very strong. It has also been fun having three different genres of metal touring together, sharing the stage.

RYL: You give a great importance to the live shows and it seems, considered that your fans are growing day by day, it is paying off….how different is to see you live?

KATL: The live show is very important! Listening to the songs is one thing but going to a live show is where it’s at. Then you have the visual engagement as well as the energy that comes with the music.

RYL: One year a go you released your first album “Kobra and the Lotus”, do you still remember the first day after its publication?

KATL: Yes…I remember our first rehearsal thinking “whoa that sounded very different”. After a couple more tweaks though we started encapsulating the sound of the album and getting very excited to go out and play.

RYL: “Forever One” was the first single released from the album, what you wanted to say with this song? It is related to the band?

KATL: This song is written for the fans, the community, and any music enthusiasts that stand up and support live bands. We couldn’t have achieved any of this without their support and belief in the scene. This song brings us all down to the same level, regardless of who is in the crowd and who is on stage. We are but one and the same. We are forever one, bound by the shared experience of the show.

RYL: You are doing “Metal without compromises” what do you mean exactly? What is the real metal for you?

KATL:Hmm I’m not sure who said that but I know as far as we are concerned, we are trying very hard not to fall into a music niche. Rather then being a specific genre of metal, we would like to say we just play straight up heavy metal. No particular label.

RYL: Your producer Kevin Churko is a great artist, he collaborated with several famous artists like Ozzy, to Ringo Starr, how happy are you of having worked with him?

KATL: It was an honour to work with Kevin! Not only is he a great producer but, like you said, he is a great artist and visionary. He is also a workaholic…it would take an army to rip him away from his chair for a couple minutes of rest! We learned a lot in the studio with him and hope to do it again.

RYL: “50 shades of evil” is an amazing song, we like the guitar progression….. but..what about the title? Why did you select it?

KATL: This was actually a way of exaggerating the level of greed within some people. The song is inspired by an all consuming feeling of never having enough. A devil’s advocate that is looking for more instead of appreciating what they are having.

RYL: What is behind the lyrics of “Welcome to my funeral”? Do you imagine it as in the music video?

KATL: Yes, the video is a direct visual of the songs message. It is about sabotaging yourself. Digging your own grave and creating your own funeral. I believe, for the most part, we are masters of our own destiny. If we are ambitious and move forward with the right intentions, we can do incredible things. We can sabotage this chance though if we doubt ourselves or let our fears take control.

RYL: Who, in the band, as the most crazy tattoo?
KATL: Pete is covered in the most ink, covering a span of a few decades of stories. I’m sure you could find a few crazy things inked on his skin!

RYL: One of our favourite songs of your last album is Lover of the Beloved….do you remember how you wrote its lyrics?

KATL: Yes I vividly remember. This is the expression of a profound love. An eternal sacrament that would be worth waiting several lifetimes for. The feeling that would make you give your life up in a second to protect the one you love.

RYL: When the next tour in Europe? Do you have a large fan base over there?

KATL: We are actually heading over there very soon! In October we will be going to Belgium for Female Voices of Metal Fest. Europe is still a very new territory for us but the fan base has definitely started developing. It’s been amazing to watch it grow. Stay posted for more dates!!