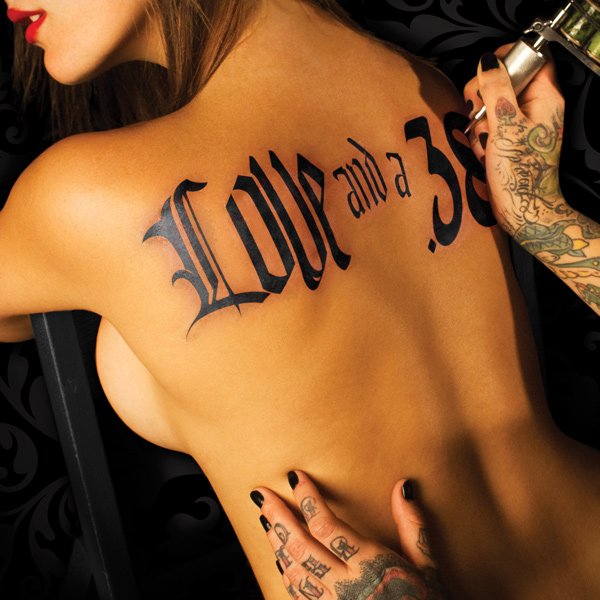 Interview with Love and a .38

Today we  interviewed a band from Los Angeles, California: “Love and a .38”

Their singer, Ryan Hudson, answered to our questions; other members of the band are Danny Excess (Drums) Justin Emord (Bass) Domo Domaracki (Guitar).

We saw them the first time during the Sunset Strip Music Festival in Los Angeles two summers ago and we are their fans since then.

We hope you will be able to get to know them better and , maybe, next time you are in LA you can go to see one of their show!

L38: Because a .45 is just too bulky to carry around in your guitar case.

RYL: You release one song per month, What is your main source of inspiration when you write your lyrics?

L38: I wouldn’t say that there is really a MAIN source of inspiration. The songs would get pretty stale if they were all about the same thing. I usually try to capture the mood of the song with my lyrics. The music has to speak to me and put me in a certain headspace. From there I just draw from life experiences and whatever I’m feeling at the moment. The old saying goes that you should “write what you know”. I find that if you DON’T do that… that if you try to force something lyrically… it comes across as insincere. And people pick up on that. The one thing I try to always be is honest. When a song comes out… it’s something that I needed to get out. That doesn’t mean everything has to bee deep and full of hidden meaning, but it’s always something that I needed to get out of me. And something that I wouldn’t mind singing every night for the rest of my life.

RYL: The real first time we saw you was at the Sunset Strip Music festival in 2011, that was a great gig, are you planning to come back also this year? Which is your funniest memory of it?

L38: We’d love to do SSMF again this year. And if we can swing it… we’ll definitely be there. It’s a really good time. They do a great job of getting a killer lineup every year and it just keeps getting bigger. It’s always such a whirlwind of a week that it all honestly blurs together once the smoke clears. Having said that, one thing that I’ll always remember is walking the red carpet at the House of Blues for the event honoring The Doors last year. We were just wrapping up an interview when we turned to our left and saw Ray Manzarek and Robby Krieger giving an interview right next to us. That was a pretty surreal moment.

RYL: After your first album self titled and released few years a go, when you are planning to release a new one? 2013?

L38: Thats a good question. We’re currently in the process of writing a bunch of new songs… really fine tuning our sound. I think people will be a little bit surprised (and hopefully pleased) by the direction we’re taking. If you listen to our most recent release, “Just a Woman”, then you go back and listen to our debut EP… you’ll see how much we’ve grown as songwriters. And really that’s the name of the game… always be improving and changing. We just hope everyone out there enjoys the ride.

RYL: You know, Rock Your Lyrics it is all about discover how the best lyrics have been written…..can you tell us more about the song “Shine up your scars”?

L38: That one was actually sort of a mutt. Danny had started that song before he and I ever started working together, and had come up with a couple of cool lines that we wanted to stick with. My challenge was finding a way to fold those ideas into something that was poignant and meaningful for me. I’ll admit it took a few tries to get it all to flow together as seamlessly as the product that you hear on the CD. I remember I was actually sitting in my old beat up Mustang listening to the demo tracks when the line “She’s a lonely pose, on the side of the road” popped in my head. From there it was all downhill. A lot of times all it takes is that one catalyst line that greases the wheels. I hadn’t been in L.A. very long and it only seemed natural to write one of those “L.A.” songs. But I wanted to try and do it in a way that was a little bit left of center and not to “beat you over the head” obvious. I think it turned out pretty cool.

RYL: You said that, among your favorite artists, there are the Foo Fighters, any plan to see you on stage with David Grohl soon?

L38: I wouldn’t call it a plan as much as wishful thinking. We would LOVE to do something with Dave Grohl. He’s one of rock and roll’s greatest icons and most fearless artists.

RYL: How important is the city of Los Angeles for you?

L38: It’s extremely important. Even if it’s a love/hate relationship most of the time. Just being here and living life in this setting provides endless inspiration for music. Both good and bad. “Ya gotta live the blues before you can sing the blues”. If you want to write honest songs about life, love, heartbreak, anger, perseverance, or even just having a good time… you’d better be living it. Otherwise people are gonna see right through you. Los Angeles affords you the opportunity to go out and “make memories” pretty much 24/7.

RYL: Rock n Lola is one of your most important success, the video in YouTube reached already 44.000 viewers, an amazing solo of guitar that reminds us Slash….how did you came up with the music?

L38: That was one that pretty much just came through jamming. Locking the door to the rehearsal space and seeing what happens. A lot of the best songs happen that way.