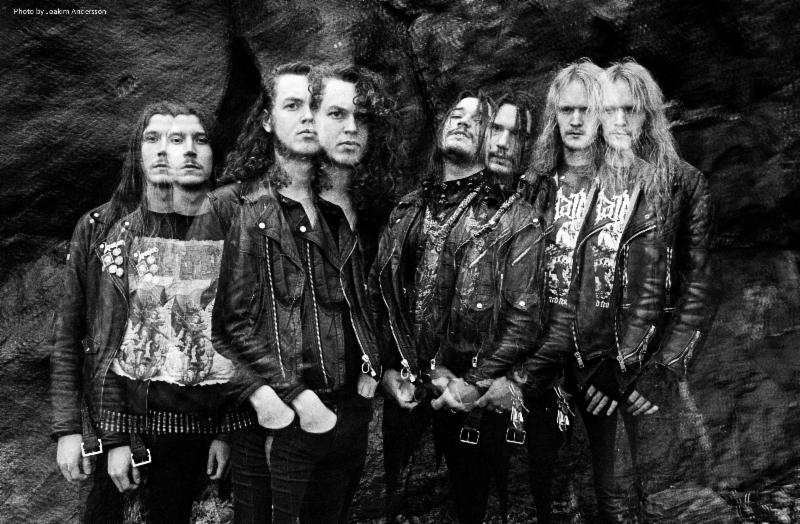 Robert Andersson, singer of the Swedish band “Morbus Chron” answered to our questions regarding the new album and lyrics (https://myspace.com/morbuschronband)

RYL: You are about to release your new album ‘Sweven’. What are your expectations for it?

Morbus Chron: It’s a very special record for us, and we think it’s great. But you can never be sure how it will be perceived by others. And with such a different record, it’s extra hard to know what to expect. People could love it, or they could hate it.

The feedback has been great so far though, and a lot of people seem to understand it. Maybe even more people than we initially thought would.

A complete hatred for ‘Sweven’ wouldn’t have changed my mind about the album’s quality, but it’s still nice to hear all the compliments we’re getting.

RYL: On the songs on the album, and in general on all your songs, the instrumental part prevails versus the lyrics. Why this choice?

Morbus Chron: I understand your site focuses on lyrics, but that has never been the focus of the band.

Especially during our early years, where the words were simply there to accompany the music. I didn’t think twice about them really.

But on the last EP, and now with ‘Sweven’, I’ve been trying to write something with a bit more thought behind it.

I’ve noticed it makes it so much more rewarding when the words contain actual emotion. But still, that which truly drives everything is the music, with the vocals only making a few appearances here and there.

In my opinion, the album didn’t need a lot of vocals. I felt the whole soundscape would become too busy. So, the lack of vocals/lyrics is because I’ve only added them in when I thought the track would really benefit from them.

RYL: How do you write your music?

Morbus Chron: I write the majority of the stuff alone at home. It’s how we’ve always done it. When I have a song finished, I’ll record a fully instrumental demo and give it to the other guys. It doesn’t become a collaborative effort until we’re actually in the rehearsal space rehearsing something. During the rehearsals, some changes will almost always occur as everyone finds their own way of playing the songs.

As for the writing itself, there’s nothing special to it really.

I’m just sitting with my guitar and fooling around until I find something I can build upon. I have an insane amount of riffs recorded.

But for some reason I can’t finish songs. That’s my biggest challenge, laying out the bits and pieces to form a bigger picture.

Morbus Chron: It’s very much like how I write music, but a more unpleasant experience. I’m never quite satisfied with words.

I have always been able to write well, but when it comes to lyrics and fitting them to songs, that’s a big headache. A lot of that has to do with the fact that I finish songs without ever thinking about where I will sing and how the vocal lines should be.

I don’t really leave any room for lyrics. So, when I’m sitting there trying to find places to sing, I often find it ruins the music because I’m so used to hearing it as instrumentals. I’d probably be a happier song writer if I played instrumental music.

RYL: “It Stretches In The Hollow” is one of our favorite songs of the new album. What inspired its verses?

Morbus Chron: It’s about a big bang. During the earlier parts of the record, we’re abandoning the world. “It Stretches in the Hollow”, the A-side finisher, talks about a new beginning.

Basically, the birth of a new world. An explosion from nothing. And just like our own universe, it still stretches in the hollow.

Morbus Chron: “Ripening Life” comes right after “It Streches…”, and it’s about the early years of the new world. A chaotic place – something resembling the Hadean era of the earth – but still very beautiful in its own hellish way.

RYL: What is the best metal song you’ve ever heard?

RYL: In 2011, you released a very successful album, ‘Sleepers in the Rift’. Among all its songs, “Lidless Coffin” seems to be the most popular amongst your fans. Why, in your opinion?

Morbus Chron: I don’t think we have a most popular song, and if we did, I couldn’t say why. Good riffs maybe? Good drumming? We didn’t do anything special with that song. But it sure is groovy and Autopsy-inspired.

RYL: Are you planning a new tour ? Will it bring you outside of Europe as well?

Morbus Chron: In March we’re going on a short European tour with Necrowretch. There are some other plans being discussed, but I can’t say anything for sure yet. We’ll just have to wait and see.