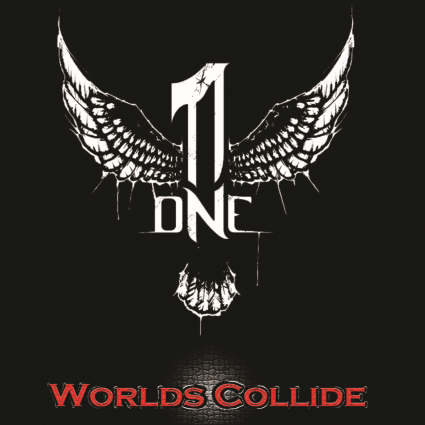 ONE will release their highly anticipated record ‘Worlds Collide’ via Pavement Entertainment on April 1, 2014.

RYL: The new album “Worlds Collide” is set to be released in few weeks, how are you preparing its launch?

ONE:As a band we are rehearsing as much as possible to be ready for our tour, as for the launch, we leave that to our label Pavement Entertainment

RYL: Who is your “Queen of Rock N Roll”?

ONE: The song is a tribute to all female fans of rock music. Don’t misunderstand us, we appreciate the male fans too but the women assure more men will be there

If the melody comes first it’s usually harder to write music around it but we do what we can to create an emotional rollercoaster.

RYL: What you like the most in plying rock and roll music?

ONE: After years of touring I gotta say it’s when people sing our songs. It gives me an inexplicable rush to hear something we created being sung by others.

RYL: Tell us about the song that gives the title to the album “Worlds Collide”, how have you written its verses?

ONE:The title of the album came from the song; obviously.

We didn’t have a title for the album while we were recording it. We just figured it would be our first self-titled release. As we were working lyrics for that particular song during the recording, we knew we could make it better.

Simply put is about an inner struggle that any person can face when they feel they don’t belong or the world around them isn’t what they want it to be.

The working title at the time was Make It Out Alive and we are much happier now with what it has become.

RYL: “Livin a Lie” is one of our favorite songs of the album, can you tell us all its secrets?

ONE: Well, if you ever go to a bar by yourself to have a drink cause you need a night to just unwind and you get a guy all pumped up stirring shit, this song is about him!!!

RYL: Which is your “Dirty Little Secret”?

ONE: If it wasn’t a secret we’d tell you….Lol

RYL: Tell us about your upcoming tour….

ONE: We plan to tour for the next year non-stop. We wanna hit every city and every state to deliver our own brand of rock n’ roll to as many people as possible.

RYL: Which is, in your opinion, the best verse ever written in a rock and roll song? Why?

ONE: I am a huge Motley Crue fan, that being said…

If you wanna live life on your own term, you gotta be willing to crash and burn

RYL: And the best verse written by you? The one that has more meaning to you…..