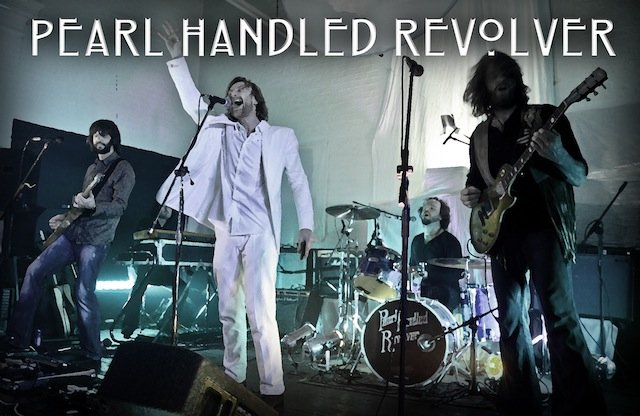 In their website (http://www.pearlhandledrevolver.com)they say: “Pearl Handled Revolver have the Blues. Come get some”

In our today’s interview we dig in to their music and we definitively discovered was they were referring to…. so, are you ready to get some as well?

RYL: We know, the question is pretty basic, but we are so curious…. why Pearl Handled Revolver?

PHR: (Lee Vernon) Knowing that the band name will be the very first point of reference your audience will have, makes it a hard decision to agree on. So, when we heard one of our earlier guitarists (Steve Tipping) utter “…if this band doesn’t make it, it’s the pearl handled revolver for me!” we realised that he had captured the essence of our sound, our influences, our musical “attitude” and our Englishness perfectly. The whole band instantly loved the name and the message it projected to our new audience.

RYL: Your first album “Colossus” has been released just one year ago with a great success from fans and critics, what do you think made it so successful?

PHR: (Lee Vernon) Honesty and passion. I think we avoided the usual “first album pretensions” by adhering to our golden rule… if it feels good, it is good! We made the album first and foremost for our selves, recording everything that made the hair on the back of our necks stand up.

There’s the passion…but I use the word “honesty” because I think today’s discerning listeners (myself included) long for real substance in a lyric, especially now, when so much of the music we hear lacks depth. So, I have always chosen to write lyrics that reflect my true feelings and emotions at the time, regardless of whether it might be painful or revealing to do so. The truth is always much more compelling than anything we might contrive. My view is that “Colossus” was so well received because that passion and honesty is woven throughout each and every track.

RYL: You just published a second album, with 11 tracks called “This mountain waits” just few days a go, one year later; which is the main difference between the two?

PHR: (Lee Vernon) Difficult to answer that one….for me each album is a capsule, a moment in time frozen for prosperity. As our musical character evolves, so do our current influences, our creative focus and our ability to realise that focus. So each recording feels more “accomplished” than the last. We do seem to have found our true character on this album, a refinement of the diversity that the first album possessed.

“Colossus” was where we cut our teeth, explored all the extremes, where narrative themes were born and the overall PHR tone came together. This alone will always keep it close to my heart as a pivotal recording for us. It also left us with a very clear view of where to go next. Lyrically the underlying theme sprang from one core notion….man’s altruism and self obsession dwarfed by the power and stark reality of the world around us. Our insignificance, if you will.

“This Mountain Waits” tackles all the usual suspects (love, hardship, passion, pain and so on) but from a completely different view point. A voyeuristic study of our behaviour as instinctive and some how, out of our control. As much a part of the world around us as the wind itself….

But let’s say that if “Colossus” were the “petulant child”, then “This Mountain Waits” is the wide eyed, hopeful graduate….

PHR: (Simon Rinaldo) We have a series of shows across the UK, however the plan is to do a few less shows than the Colossus tour but all at high profile festivals and venues. Still early days for This Mountain Waits  so we will have to just see what happens over the next few months but already the signs are looking really good.

RYL: “Rattle Your Bones”, is the first single, an amazing blues song, can you please tell us what inspired you while you were writing it?

PHR: (Lee Vernon)As I mentioned earlier, while I always write from personal experience, some experiences clearly lend themselves to voyeuristic interpretation better than others. As part of my job, many years ago I was required (once or twice a year) to escort a large number of business associates (including managers and directors) to a “nightclub” to be entertained by our company.

I was told it was “to grease the wheels of commerce..” but I was still horrified to discover the nature of the club! However, rather than being appalled by this sleazy underbelly strip club, I found it to be a gold mine lyrically. Crammed with some of the most extreme characters I was ever likely to meet, in a situation that inevitably exposed their true prime evil behaviour. All I had to do was write about them, the hard part was conjuring up the right imagery in such a short space of time. I wanted the listener to question who they felt most sorry for. Despite our first instinct to pity the poor girl, the bawdy business man may be in a worse place and demand our sympathies more?

So I tried to present an unbiased display of characters. Add to that the “preacher man” narration and the observation was complete. With a few recitals to the band, they soon surrounded the bawdy sleaze of the vocal with dark and swampy keys, some bone tapping percussion and Oli’s wonderful bass line stomping like a zombie through the whole thing. The moment we heard it all come together we just knew it was going to be a stand out track on the album.

RYL: Making the video was fun?

PHR: (Lee Vernon)Oh yeah! Probably the best fun we’ve had on a shoot so far. Maybe because we weren’t reliant on third parties on this occasion. Just us five, with a simple idea, really enjoying ourselves!

RYL: Your style mixes blues, hard rock and psychedelic music; if you had to pick a song that represents these 3 genres all together , what you would select?

PHR: (Simon Rinaldo) It’s difficult to choose one song, I suppose if it has to be one then it has to be LA Woman by The Doors.  LA Woman is a blues song at heart from the psychedelic era, it is high energy rock n roll but most of all the lyrics have a deep meaning and depict a scene.   All Pearl Handled Revolver songs have deep meanings, tell stories or depict a scene.

The sound of The Doors and LA Woman album in particular was one of the blueprints for the sound of This Mountain Waits.  We love the fact that LA Woman was pretty much self produced by The Doors and basically recorded live with very few overdubs, when making this they went back to their roots and recorded in their rehearsal rooms… just like us.  LA Woman has a rawness to it, energy that can only be captured live…. It is a very ‘real’ album.   We like to think that This Mountain Waits shares those qualities.

RYL: In your website you are talking about a legend of hard rock Jon Lord; how much Deep Purple inspired your music?

PHR: (Simon Rinaldo): We all love Deep Purple, they are a true British hard rocking high octane blues band, still going strong. There are some similarities in sound as they too feature the Hammond organ as a lead instrument. Jon Lord was a really great guy and we were very sad to hear of his passing. Meeting him was a privilege and gaining a critique from him on our first live performance was undeniably a blessing. We like to think that a little part of him lives on in some of our music… he has been very inspirational.

RYL: In the song “You got it wrong” you are saying that there is a message hidden in every song, you know, this is the reason we created Rock Your Lyrics, to try to give an explanation on it…. can you tell us a bit more about the message contained in “Honeycomb”?

PHR: (Lee Vernon):If you have ever truly loved someone and been betrayed, this song will hopefully strike a chord. The opening lines describe the subjects ravaged soul as a quiet, desolate landscape. The use of cryptic analogy shrouding the building rage, just as the mist hides the dormant volcano of his loss. There is something magical about this track, how the music sneaks up on you building to the middle eight crescendo, then explodes. The music hurls you into one man’s momentary fury, spins you like Dorothy’s house, then sets you gently on the ground, in quiet submission.

I love this song. It is perhaps my favourite on the album because it’s the perfect example of how music can elevate the spoken word to epic proportions, magnifying emotions and stirring the soul. Even if you could not understand English the message can be found in the music.

RYL: Where do you see yourself in few years from now?

RYL:  “Maybe In Time” is a song full of energy published in your first album, can you tell us a bit more about his lyrics? it is still one of your favorite songs to play live?

PHR: (Lee Vernon) Interesting that you picked the very first song that we ever wrote together. Structure wise, it’s quite simple…just a good old fashioned rock stomper. This creates a perfect platform to write on, supporting a number of poetic “standards” with a clearly defined timbre to match. In fact the song remains unaltered from the original poem that I had in my note book. Lyrically it’s message is also simple….

“I’ve been through all this, please tell me there is someone out there for me!”

The skill (as always) is in how you explore this descriptively. Get it right and everyone will associate with it and make it their own. Get it wrong and you get Justin Bieber bubblegum, with no real soul.

“Maybe In Time” does have “great energy”, as you say, which is why we still love playing it live and it goes down with the crowd very well indeed. So hopefully, we got it right 😉