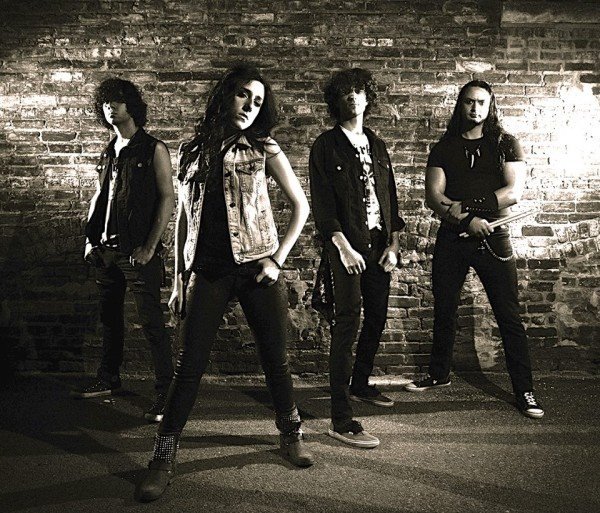 Romantic Rebel (http://www.r-rebel.com) debut album has been just released and we took the opportunity to discuss with them their future plans and , of course, their lyrics….

RYL:  Your debut album “Romantic Rebel” has just been released….how do you feel?Romantic Rebel: (Alex): “Excited. It’s been so long without being able to share our music with the fans. It feels so good to finally be able to do that.”

RYL:  Our favorite song is “New Way To Sin”, do you remember when you wrote it? Tell us….

Romantic Rebel: (KT): “I know it was ‘born’ around the same time as our song “Disappear” was. It was when Alex and I were getting tons of writing ideas all at once and had to try and separate them into different songs.

So those two were started and finished at about the same time. So we always joke that they werethe “twin” songs on the album.”RYL:  How do you usually write the lyrics of your songs?Romantic Rebel: (KT): “Usually what happens is that Alex will write the music for a song, then he’ll give it to me to add lyrics to. I’ll go into a room with the song and a notebook and come out with a pretty finished product. Then I’ll sing the lyrics for Alex and we’ll tweak them if  necessary.”RYL:  Do you find it difficult or it flows naturally?Romantic Rebel: (KT): “Usually it flows pretty naturally. Especially if I’m really amped up about the subject I’m writing about. Although, I try not to write when I know I’ll only be mad about something temporarily.

Because if I only finish half of the song one day, then try writing the rest of the song the next day when I’m not mad about whatever it was I was angry about, the song loses it’s meaning and integrity. And the lyrics become hard to finish.”RYL:  after just few days “Alive” seems to be the favorite song from the iTunes fans, why in your opinion?

Romantic Rebel: (Alex): “I’ve noticed that too! I think it’s probably because the song has a really catchy hook and is easy for people to sing along to. Plus, I think the message of the song is really positive and people respond to that.”
RYL:  What is the thing you like the most in doing music?Romantic Rebel: (Alex): “Live shows. Hands down. The adrenaline rush you get minutes before hitting the stage is the most amazing feeling. Being able to play these songs that we worked so hard on in front of our fans and to see them singing along is so incredibly rewarding.”RYL:  tell us about the tour……when, where and, especially, how loud….. 🙂Romantic Rebel: (Alex): “We’re so excited for it! We’ll be hitting the road with Bobaflex (awesome guys and awesome musicians) starting May 30th to June 26th.We’ll be playing around the Midwest and East Coast.

How loud? Eleven.Obviously.”RYL:  With whom you would love to play?
Romantic Rebel: (Alex): “A rock icon that I’d love to tour with would definitely be Alice Cooper. I love his music and he’s been such a huge influence on the rock scene ever since he came into it (Plus I think we’d be good friends!)

I’m totally obsessed with horror movies. The modern day heroes I’d love to play alongside would be Asking Alexandria. Their music is amazing and their live show is so full of energy. It’d be a dream to open for them.”
RYL:  Last question: tell us everything about “Moment”, what inspired its lyrics?Romantic Rebel: (KT): “This song is about not letting what others say or do affect how you live your life. And about finding who you are. That’s actually the theme of most of the songs on our album.”