Interview with Sol Pereyra: a new album, lyrics and more!

RYL: tell us everything about your new projects, when a new album?

Sol Pereyra (http://www.solpereyra.com.ar) : I’m a few months into presenting my newest album “Tirame Agua.” I was on tour doing shows in Argentina and Mexico and the idea is to keep playing this album every corner of the planet where I am invited. Meanwhile I’ll also be recording new songs for a future album. 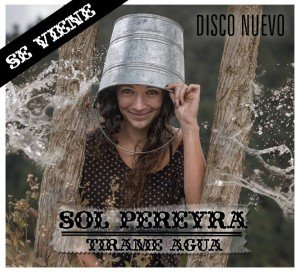 Sol Pereyra: Gusana Y Mariposa” is about an elderly lady in a dream I had. It ended up being about weird things that happened with my heart and my head after that dream happened.

Sol Pereyra: life in general and everything that happens by simply breathing and journeying across the earth. I am inspired by love, street, social situations, my anger, my joys, existential doubts, the contradictions which happen and more.

RYL:  Do you remember how the lyrics of “Clase Media” have been written?

Sol Pereyra: “Clase Media” was a letter that I wrote from great anger with a social situation in Argentina, then over time, I realized that the letter was appropriate for people of any country.

Talking about self centered people who care about having a better car, better appliances, better tv and not being sympathetic to the people who don’t have anything.

Sol Pereyra: sometimes I shut myself in my room just typing for hours, sometimes I grab momentum anywhere, stop and start writing, sometimes at night I get an idea and I have to get up and write it, I really have no one way .

RYL: what is the meaning behind the verses of “Las Luces”?

Sol Pereyra: Lights is a more introspective song speaking about life’s most difficult moments but ultimately having the confidence to succeed.

The scars that make us grow and give us strength to continue, are lights that illuminate sometimes and sometimes not.

Sol Pereyra: I’ve always been a person who has been identified with the music first and then the lyrics.

There are many, but rather I identify with lyricists as León Gieco, Violeta Parra, Victor Jara, I think they have in their lyrics containing rebellion and libertarian spirit that you have with the true spirit of rock.

RYL:  How do you see your music evolving in the next years?

Sol Pereyra: I see my music as something that will grow on par with what I’ve achieved growing and developing as human beings do in general, I hope it’s free, danceable, without prejudice.

Sol Pereyra: I wrote a song about trees which are one of the natural wonders I love about life.

Sol Pereyra: my next tour begins tomorrow when I get on my bike and pedaling out of town. Hee hee!