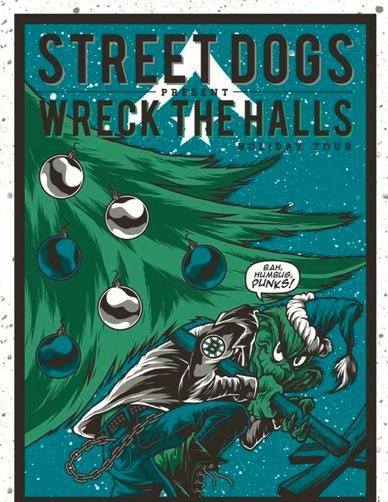 Mike McColgan, lead singer of the band Street Dogs (www.street-dogs.com), while currently touring across USA (Wreck The Halls tour) ,  answered to our questions regarding the lyrics and new projects on a pipeline.

RYL: Ten years of Street Dogs, looking back what is the biggest achievement of your career as a band?

SD:  I think Street Dogs biggest achievement is that  we have realized longevity.

We have been doing this since 2002 and we continue to have a desire to record songs and perform them live around the world. We are grateful to our family,friends and fans who have made this all possible.

RYL: In the song “Free” released in 2008 in your fourth album “State of Grace” you are saying that “Our Music is a shelter”, now, five years later, it is still the case?

SD: Our music is our collective personal refuge from the hardship of life and it serves as our therapy and catharsis. It also empowers us and propels us to live our lives as well.

Yes it is still our shelter so to speak.

RYL: Your band has seven hundred thousand fans across the world. This is mind boggling. You also recently completed yet another successful European tour. Do you still love to play live?

SD: Playing live is a challenge and a gift we all rise for and relish. It never gets old. It is the best part of being in a band for sure.

RYL: You had the possibility to tour with the Warped back in 2008, what you remember about it? Which is the best tour you have done  so far?

SD: Warp tour is the boot camp of touring. Everyday your time slot changes. On a dime the weather can change and usually does bringing brutal heatwaves or stinging rainstroms. I love the tour as the feeling of community,equality and parity are enforced and nurtured by the tour production crew who are by far the best tour production crew in the world.

RYL: You are deeply involved in activism, your support to non profit organization like Oxfam is showing to everybody that there is much more that just music….another thing that makes your band so special… how difficult is to fight against poverty and injustice?

SD: Clearly the fight against poverty and injustice is always raging against the physical,mental and spiritual cancer of greed and moneylust. We just try to do the best we can,help where we can and that’s all.

RYL: One of your last songs is “Rustbelt Nation”, it talks about a journey in America from the time to your father up to today, what does Rustbelt Nation means to you?

SD: Rustbelt nation means the emaciation of American manufacturing and the death of the American Dream.

RYL: Crooked Drunken Sons talks about the war from a soldier point of view….too many promises but the war never ends….do you remember how have you written this song?

SD: This song was written for a good friend of mine who served in the US Military and he shared with me his harrowing tales of combat and the ptsd in it’s wake. We have delved in this topic before but this time it is sonically more frenetic and incendiary.

RYL: A new studio album is getting ready by the end of the year…do you have more info to share about it? Do you know its title already?

SD:  The two tentative working titles are Open Throttle Johnny and The Breaking Point.
The record will drop in the summer or early fall.

RYL: “Punk Rock & Roll” is a great song from the album Street Dogs of 2010…. Three years later, what does it mean for you being punk?

SD: It means not giving a single fuck about what other people outside of our group think. We play,say and do as we please. Not going to change our mantra.

RYL: In a world where a coffee in Starbucks costs like (or more) than a song downloaded in internet, how is difficult to make music?

SD: Its very difficult because a tough business got way tougher when illegal downloading came to town but what the hell can you do? People can take the music and it spreads around.

I really don’t stress out too much about it. Share the music all over the internet and the world.