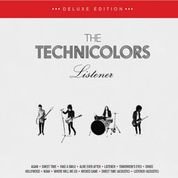 RYL: Your debut album “Listener” have been released last year, which was your most important achievement you were able to reach with it?

Technicolors: I think the most important achievement has been that it’s given us an opportunity to travel and play our music night after night, bring it to new people, and to see the songs evolve and truly become living things.

We’re still a young band, and we’ve had opportunites to be a part of some amazing shows and experiences. None of that would be possible if we didn’t’ decide to make this record.

RYL: In your website you are saying that “touring as a lifestyle”, where the road brought you and where is going to bring you? Which was the greatest gig you did so far?

Technicolors: My favorite was at the House of Blues in Chicago. We had been on tour with the Psychedelic Furs, who are some of the sweetest people in the world, and the last show of the tour was a sold out HOB show in Chicago.

There was a ton of hype and build up to the show (which can often lead to disaster), but this one went flawless. Also we had our families there with us, so it was a really special night. The perfect way to end the tour.

Technicolors: Typically I start with the music. Whether it’s a loud riff or a soft bed of chords, I’ll come up with something and let that set the mood.

That determines everything for me. What I’m writing about, what emotions to capture, and what I want to say to the world.

Sometimes it’s a wrestling match and it takes months to put lyrics to a melody, other times it falls out of the sky and happens right away. The road to a complete song is always changing and leading you through places you’ve never been.

RYL:  What does make a “good song” a great song?

Technicolors: I’ve found that songs that have affected me the most by my favorite bands are the songs where the lyrics and the music have some sort of unique relationship, whether it makes perfect sense or no sense at all. It’s almost like a romance.

Theres no real answer to this question, but if you write a song that has that musical/lyrical spark, and then goes on to relate with people and become a soundrack to that moment in their life, then that’s a really special thing.

That’s how I feel about all of my favorite songs from the bands that have inspired me.

RYL:  Let’s talk about “Sweet Time” the first single from the album, what inspired its lyrics?

Technicolors: A lot of different things. The inescapable tension of relationships, beauty of vulnerability, but also learning how to let that tension go and embrace vulnerability in a particular situation.

RYL: And Hollywood? What does this song means to you?

Technicolors: Hollywood was the first Technicolors song ever written. I wrote it because I had booked my first show ever, which happened to be in Hollywood as an acoustic act, and needed another song.

As you could imagine it was way more broken down and acoustic, but it was still the same riff and layout. The lyrics mean absolutely nothing, but everything at the same time. It’s a special song for me because it’s a reminder naivety, spontaneity, and the beginning of an amazing journey.

RYL:  What do you want to achieve with your music in the next three years?

Technicolors: Pretty simple… I want to write better and better songs, and to see those songs reach people and bring people together.

RYL: Living on tour is never easy, how do you find the time to concentrate and create new music / songs?

Technicolors: You have to go with the flow. You can’t force too much, you cant fight too much. You just have to roll with the situation, and use that as your inspiration. What better place to be inspired than a city that changes every single day.

RYL:  To whom the “tomorrow’s eyes” belong?

RYL: Technicolors is a rock n roll band from the desert….. is this desert of any inspiration for your music?

Technicolors: Yes and no. It’s barren and dry, which can be a unique take or asthetic for some people. But when you live here, as you could probably imagine, it beats you down. BUT in the times that it feels uninspiring or barren, to me that in it of itself is inspiring, because everyone can relate to that at some point in their lives. Probably more than we’re willing to admit.

RYL: Last question, tell us everything about “Again”…

Technicolors: It’s a pretty simple idea… The idea of re-birth or a fresh start coming when all odds were against you, or you never thought it could happen in a million years. We had a great time creating that song. It’s a cheery rocknroll tune, and it’s a loud one at that if you’ve ever been to a Technicolors show.