Interview with The Kickback

RYL: Tell us about the upcoming tour “American Splendor”, what is new? What you have prepared for your fans?

The Kickback: This will be the first tour we’ve done that touched both ends of the US. It’s pretty daunting and assuredly stupid.

We’ve got a lot of issues to put to bed regarding our debut record taking so damn long to come out and this feels like sort of a cleanse en masse. We could either sit around and wait for this stuff to get sewn up or just hit it. And that’s what we’re doing.

RYL: Which is your favorite cover-song to play live?

The Kickback: For a long time I was sort of uniformly against playing any covers.

It always seemed like a lose/lose proposition: If people like it, it’s certainly no thanks to you. If they hate it, you’ve just burned a spot in a set that’s usually between 35-40 minutes and you could have included one of your other originals.

This tour we’ll be playing Midnight Oil’s “Dreamworld.” We throw in The Jam’s “In The City,” too. Music fans know those tunes. But it’s probably not playing at Pizza Hut.

The Kickback: It takes a very long time. Often what I consider the “real” words don’t get written until we record.

We’ve played songs live that are straight-up gibberish lyrically, because it takes me a long time to figure out what I want.

And I won’t sing it if I don’t feel it, which I think can also make things a little more difficult because it involves a lot of waiting.

The things I feel strongly about might be that Coke started selling Surge again. That was a big day in my apartment.

The difference between me and a lot of other more intelligent people is that I will write a song about it. But I know that I mean it with every stupid bone in my self, and that is very important to me.

RYL: Do you remember the day you wrote “When I Die”? What does this song mean for you?

The Kickback: Words almost always come later. I remember writing those words while my brother was just sitting at his computer waiting for me to get done so we could record the demo to send.

It’s a terrible way to work and I do it a lot. Worry about doing it all day but not actually doing it until you’re officially behind.

All the anxiety and none of the payoff because at best you can say, “Man, I would have felt great about that if I’d done it 12-hours ago.” The song is about being so megalomaniacal that you try and control things that happen even after your dead. I’m terrified of dying.

I heard Larry King is, too. I don’t know why that matters. Anyway, for a while I was convinced if I micromanaged my funeral plans that I might have some kind of control over, you know, not existing anymore. This started when I was 22 or 23. We have a lot of songs that basically amount to “I don’t want to die, please don’t make me.”

RYL: Which is your guilty pleasure when you are onstage?

The Kickback: I say very demotivating things to myself. I trash talk to myself.

Out loud. Hopefully off mic. I think I’m a little confrontational and I like to feel sort of hurt by the end of the show. Sometimes a guitar gets thrown or sometimes I get hit in the face and that’s always 100% better than walking off stage and feeling like you have energy to go out and do something else.

The Kickback: Any band that answers this question is a band I would like to punch in the mouth. Not really, well maybe.

My favorite song we have is always the one we’re working on. If you like your old stuff better, I think you have a very serious problem. 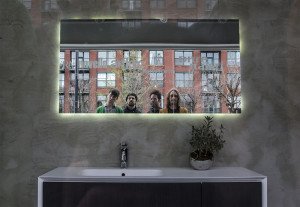 A new song we’re working on includes “emotional economy” and “Laffer Curve” in the same line which is nauseating whether or not you know what that is. I learned from a podcast. Most of the words I like at the time I hate very much later, so whatever’s new, I’m into it.

RYL: How did you write “Sting’s Teacher Years”?

The Kickback: The music started in Beresford, SD when I was back home living with my parents after graduation and getting ready to move to Chicago.

The words, again, came much later, but I still do remember finding those chords while sitting on my bed. The song took so long to write, I basically wrote a song about how I felt about the time I started writing the song.

My band had the tiniest amount of success in South Dakota and I understood that moving to Chicago basically hit Reset on the works. And I was scared. I’m always scared.

RYL: According to ITunes, the fan’s favorite song is “Please Hurt”, why in your opinion?

The Kickback: It’s the newest thing we have. That’s my bet. The chorus is a lyric borrowed from a Randy Newman song that I thought should have become our national anthem, but I don’t think anyone ever heard it.

I wanted to try and make a feel-good pool song but with the chorus “I want you to hurt like I do,” which I think is the most human and honest human sentiment there is. It’s not mine. It’s Randy Newman. I honestly just wanted more people to hear those words together.

Randy Newman is the greatest. The verse on “Please Hurt” checks There Will Be Blood and just a lot of very cruel things that I know people think but so few say them out loud.

I don’t know if that’s a good thing or a bad thing, but it’s such a human thing.

RYL: Who gave you the best advise, lyrically speaking?

The Kickback: I was listening to Smokey Robinson’s “Tracks of My Tears” today. I was dropping my wife off at class and when she got out of the car, I just blared it.

Reverbed tambourine is just pouring out of our tiny car and I’m trying to hang with the vocal as well as a white boy can try. And the chorus can sound so cheesy.

“Take a good look at my face. It seems my smile looks out of place.”

If I heard that on a Bruno Mars song I would roll my eyes and out of the car. You could get away with “cheesy” words back in the day and it didn’t matter.

If I use “baby” in a song, it’s because I’m revisiting a conversation I had with my wife where I called screaming because our apartment got broken into. That’s the only way. The one decent love song I ever wrote also mostly had to be about eating disorders.

I can’t write pop gold like the oldies because it’s just not okay anymore and I won’t be the schmo up there sounding like some Buckcherry song.

So today it was Smokey Robinson.