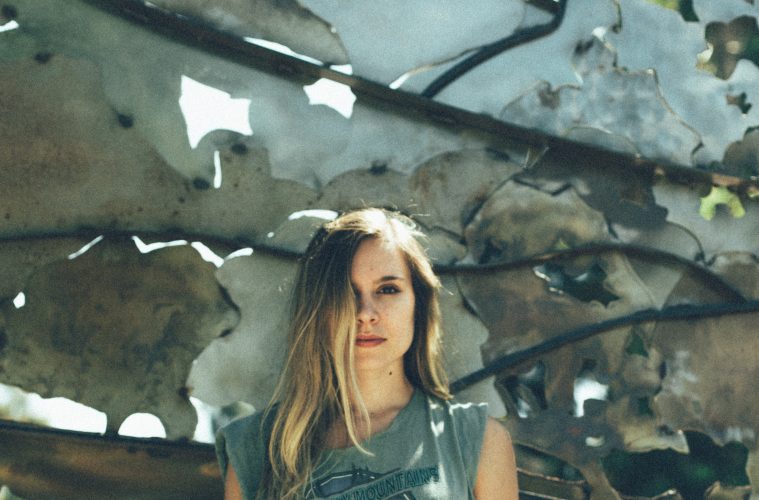 It changes from song to song! Usually I’ll start with a conceptual or visual idea based on something I’m going through or feeling. Sometimes that means the lyrics come together the same time as the music, but sometimes I’ll just start writing a ton of lyrics and will later rework them to fit with a musical idea.

Being genuine and getting your message across, hands down. I’m a big fan of imagery and unique words in lyrics, but at the end of the day, a lyric can be very simple and still extremely powerful. The best songs happen when you’re just being raw and honest, and not trying to write a perfect song.

Not to strangers! For me it’s weirder to reveal those things to the people I know, my friends and family. Playing songs for the people they’re about is weird too. Sometimes I’ll have a really specific lyric that’s obviously about someone in particular so I have to just fess up and play it for them. It’s way easier for me to have strangers hear my songs.

I think my favorite lyrics are probably “Intimidated.” Just because I didn’t do a ton of editing and rewriting – just a little bit to tighten it up. This song is super raw and just kind of my mind spilling out all over the page. That said, an unreleased song of mine called “Passive” is one of my best songs lyrically, I think. That will be on the EP that’s coming out soon.

What inspired “Intimidated,” your latest single?

I tend to overthink everything to an extreme degree, and it’s usually a bad thing. When I wrote “Intimidated,” I was feeling really unsure of myself in the context of a fairly new relationship, and I was convinced that I was going to self-sabotage it and that it was all doomed, just because I was getting too in my head about everything. But in case anyone is wondering, it was totally in my head and turns out I never needed to feel that way!! But hey at least I got a good song out of it.

This is my one big “fuck you” song, and it’s kind of as simple as that. I was kind of seeing someone for a while that was very unhappy and just wanted someone else to bring down with them, and it all ended in a crossfire of stupidity and tears. Turns out those people don’t make you happy – crazy right?

Do you remember the day you wrote “Changes”?

I remember the many, many days! “Changes” was written over the course of an entire year – maybe more actually. I wrote it with my good friend and collaborator Dan Sadin, and it actually started as a very different song with no purpose or ultimate direction in a random writing session, when we barely knew each other. A year later we were touring in another band and close friends and decided to revisit the song and completely rework it. Hundreds of hours later and we found the magic in it.

What are your plans for the upcoming months ?

I’m playing a lot of shows in December, including my first tour date up in Washington state opening for my friend Yoke Lore! Plus a free show on December 11th at Madame Siam in Hollywood. And then I’ll be putting out an EP shortly after the new year. Then who knows! Hopefully continuing to grow, play more shows, and put more new music out not too long after.

I just got home for Thanksgiving and I am already starving.