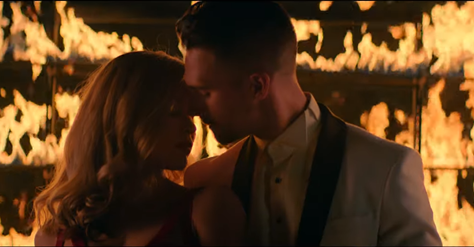 Recording artist, songwriter, and actor James Maslow has released the adrenaline-pumping, James Bond-esque new music video for his latest single, “Love U Sober.” The visual for the euphoric dance comes equipped with fire, helicopters and a tempting love interest, showcasing Maslow in top leading-man form. The video, directed by Michael B. Chait, marks the next collaboration between the pair since the filming of WWII action flick Wolf Hound, which Chait also directed and will star Maslow as a fighter pilot. “Love U Sober” is the first of many singles from the sexy crooner’s most vulnerable era of music to date and touches on his life and past relationships about navigating love and lust. PRESS HERE to stream. His next single “Delirious” will reveal a seduced Maslow succumbing to the irresistible temptation of that person who knows just how to drive you crazy.

This Friday, June 7th at 9/8c, the CW will debut The Big Stage, a first-of-its-kind global talent show co-hosted by James Maslow and Elizabeth Stanton with two 30-minute episodes airing back to back. Unlike most talent shows, The Big Stage is not a competition, it is a celebration of talent as the best of the best of their fields. Performers include Aerialists, jugglers, comedians, singers, cirque acts, Las Vegas headliners, dance groups and dance duos and is recorded in front of a live audience.

“This is a big week for me. Dropping my first big music video as a solo artist, celebrating the premiere of a new series on a major network – all while on set filming a new movie here in Philadelphia,” shares Maslow. “I never could decide which I prefer more, the camera or the microphone, and I hope to never have to choose. Grateful to all the fans who continue to support all my worlds. Expect a lot more of it all.”

Last week brought the news that Maslow will be starring in the new film ‘We Need To Talk‘ alongside Arrow’s Emily Bett Rickards. This summer, he will star in the comedy ‘My Boyfriend’s Meds‘ alongside Jaime Camil, Sandra Echeverria, Jason Alexander, and Brooke Shields.

James Maslow continues to make waves and earn notoriety with his original music and is a proud past recipient of the prestigious Macy’s iHeartRadio Rising Star Award. The coveted title earned him the opportunity to open the iHeartRadio Music Festival in Las Vegas as well as KIIS FM’s Jingle Ball in Los Angeles and Z100’s iHeartRadio Jingle Ball in New York City.