rockyourlyricsNovember 17, 20180 views
News0 views 02 min read
Following an incredible 46-date UK and EU tour (including four sold-out nights at London’s Wembley Stadium) supporting Ed Sheeran, acclaimed singer-songwriter Jamie Lawson returns with fresh 2019 headline tour dates, as well as a video clip teasing brand new music, with further announcements to imminently follow.
Reflecting on the past year, and looking forward to the future, Jamie comments: “It’s the strangest feeling walking on to a stage as big as Wembley Stadium, Stade de France or The Olympic Stadium in Berlin. There’s an electricity to it unlike anything I’d felt before at a show, the size of it all, the excitement, it races through you and leaves you breathless. Opening for Ed Sheeran on all those dates was an incredible experience and one I hope never to forget. It definitely leaves you hungry for more and getting back to do your own shows, so I’m very excited to be heading out on the road again, playing songs from the last two records and introducing people to the newer songs as well.”
In his armoury, Jamie Lawson holds an international hit single, a Number One album, an Ivor Novello Award, 238 million combined digital streams, 28 million YouTube views, and a huge social media following. As the first signing to Ed Sheeran’s Gingerbread Man Records, his single ‘Wasn’t Expecting That’ became a hit around the world, selling over a million copies worldwide.
It’s an immensely powerful return from Jamie, and tees up 2019 to be yet another incredibly exciting year. 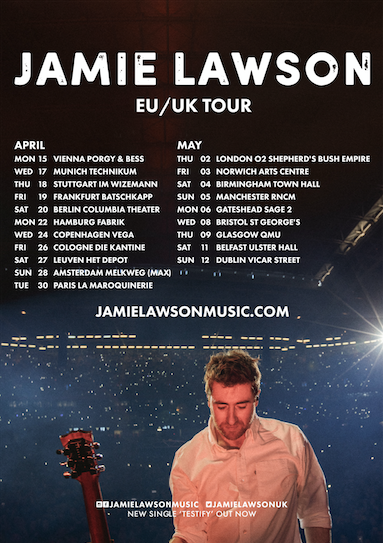