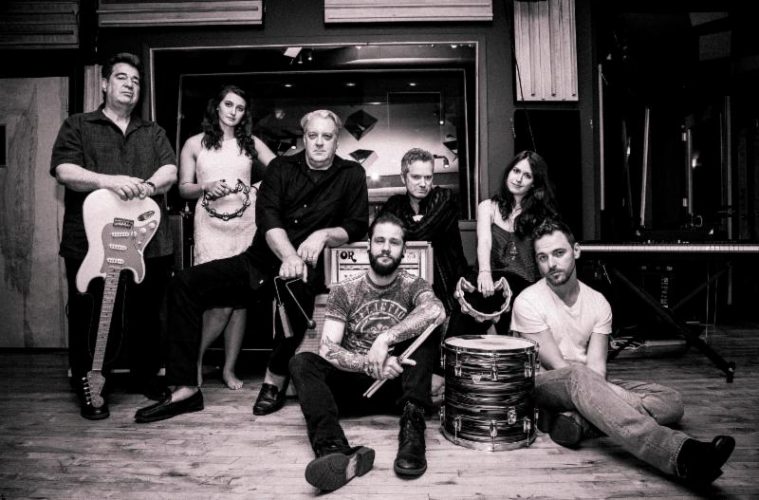 Americana band The High Plains Drifters who are putting an electro spin on their Americana roots by letting their overwhelming love and passion for Jennifer Aniston prosper with new single “Jennifer Aniston” remixed by acclaimed global techno/EDM producer Kris Vanderheyden. PRESS HERE to listen. Vanderheyden is one of the pioneers of the Belgian techno, electronic, and dance music scene and brings pure 90s EDM nostalgia to the single showing homage to the megastar. The single comes ahead of the release of the official music video out this month.

The band’s new self-titled debut album is produced by Greg Cohen (Justin Timberlake, Celine Dion, Christina Aguilera and more) and Charles Czarnecki (asst. musical director for the Broadway musical JERSEY BOYS). The album conceptualizes a listening experience of a sonic road trip across the country, where your radio station of choice automatically tunes into different musical genres as you travel. As they propel the listener through various genres (pop-punk, mainstream rock, ballads and more), one thing is certain: The High Plain Drifters offer a cohesive body of “feel good” rock-n-roll. The front man is Larry Studnicky (songwriter, lead & backup vocals), the lawyer who, at the turn of the millennium, structured and closed the landmark label and publisher deals that ushered in the world of digital interactive radio (enjoyed today by listeners of Pandora, Spotifiy, etc.)

The band also features Charles Czarnecki (producer/songwriter, keyboards, lead & backup vocals), John Macom (rhythm & electric guitars, lead & backup vocals) and Mike DoCampo (rhythm & electric guitars, backup vocals), all of whom are lifelong friends that created the group purely to bring happiness to the ears of every listener. Before coming together as The High Plains Drifters, the group’s members have worked alongside an array of legendary acts and artists including Pete Townsend, Brian May & Roger Taylor of Queen, Suge Knight of Death Row Records, Fred Schneider of the B-52‘s, and Mickey Dolenz of the Monkees. John Macom’s music has been showcased in indie movies and TV shows, including Dawson’s Creek, Party of Five, and Felicity.

The High Plains Drifters have recently released the music video for their debut single “Virginia,” a classic rock track off their self-titled EP about longing to reignite the spark with an old flame.