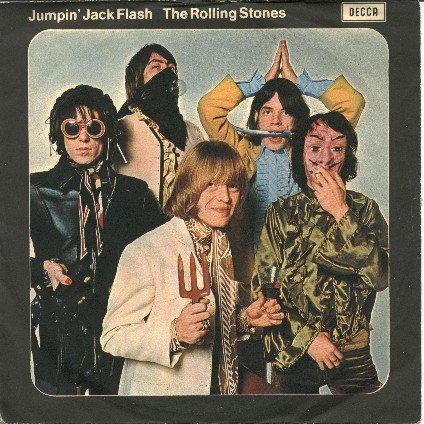 Have you seen already the reportage of Rock Your Lyrics from the last concert of Rolling Stones held in London the 29th of November? NO? Hurry!!!

As you might have noticed we love the Stones and especially Keith Richards, we always been big fans.

A blues song “Jumpin Jack Flash” was released (in 1968) as single first and then,one year later, included in the album, greatest hits “Trough the Past, Darkly”.

After the album “Their Satanic Majesties Request” inspired by Sgt Peppers of the Beatles the Stones decided to leave the psicadelia and to go back to the roots of their music……..where everything started, the blues.

But, who is Jack? Will you be surprised if we tell you that he was the gardener of Keith Richards country house?

As the legend says, Mick would have been woken up by some noise and once asked what was all that Keith would simply answer “it is jumping jack” and then Mick would have said “flash!”.

From there, Jumpin Jack Flash, one of the most important song of all times due also to an amazing guitar’s riff.

In fact the lyrics could describe a period of pain and sufferance but …..it is all right now……in fact is a gas!

Rolling Stones were able to start everything once again …..