We absolutely love their sound and we are happy today to support once again the Dubai Rock scene with this interview with Empty Yard Experiment (http://www.emptyyardexperiment.com).

They just released their new album and they are ready for the tour that is going to bring them in Europe, Australia, India and many other countries.

As usual ( 🙂 ) we asked about the meaning of their lyrics and the message that they want to communicate with their songs…..

RYL: 15th of March 2014, a date to remember, the launch of the new album and a fantastic performance in Dubai… how do you feel?

Empty Yard Experiment: A mixture of exhaustion, delight and relief. We were faced with a multitude of challenges not only in the process of recording and producing the album, but with the launch show itself. The fact that we managed to pull it off in the end and get such a great response is incredibly rewarding.

RYL:  Tell us more about this album “Kallisti”, what does it mean for you? How long it took to prepare it?

Empty Yard Experiment: “Kallisti” is the inscription on the Apple of Discord in Greek Mythology, which means “to the fairest”. It signifies the core of an argument that may originally be based on a small issue, but escalates into a much larger one.

The album took quite a while to arrange, track, mix and master. We originally planned to get it all done in only a month or two – and it ended up being something like seven. All in all, it’s a collection of the songs that we’ve written since the release of our first album in 2011.

RYL:  Lyrically speaking, which is the main message you want to transmit with it?

Empty Yard Experiment: The album’s concept focuses on the notions of chaos and discord, which often define the way that any of us relates to various aspects of our existence – whether it’s other people, authority, the divine, or the subconscious.

Discord is also probably the best way to describe how each of us, as members of the band, relates to each other, as well as the way in which we have written this album.

So the lyrical themes in each of the songs basically play on the fact that, in an almost schizophrenic manner, we are all able to morph into different people or personalities depending on the situation that we are placed in.

RYL: “Entropy” is our favorite song, what inspired its lyrics?

Empty Yard Experiment: Of course, “entropy”, in this context, denotes the tendency of living matter to drift toward a state of chaos and disorder.

Beside “Anomie” – another track on the album – “Entropy” is the song that pretty much encapsulates the thinking around “Kallisti”, especially the ‘speech’ in the mid-section of the song. The story that it tells is one of despair and desolation that our world and the human condition itself often descend into.

But it is also one of hope; hope that disorder and uncertainty can also breed renewal, progress and evolution.

Empty Yard Experiment: The crystallization of the structures of our songs is driven by instrumentals most of the time. We sit around and analyze how a certain piece makes us feel, and the images that it brings to life in our minds, and that requires a mental and emotional connection – almost on a higher plane of some sort.

Sometimes, it’ll be a theme that everyone feels the song should be about, and Bojan (Preradovic, vocals, guitar) then writes the lyrics around that theme. Sometimes, it’ll be a theme that he’s crafted a song around on his own. Other times, someone else will have something to write about – like with “There Will Never Be”, where Kaveh (Kashani, bass) wrote the lyrics with Gorgin (Asadi, keys) and sang them on the record.

RYL: What about “God has his reasons” what brought you to select this title and write its verses?

Empty Yard Experiment: This is a song that actually took us months to write, and it turned our to be quite an opus. Thematically, it addresses the ambiguous relationship that all human beings tend to have with the notion of the divine at any given point in their lives. 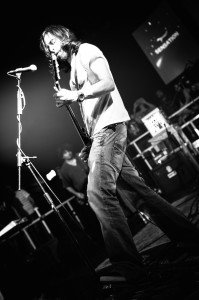 The lyrics are basically a hypothetical conversation between an individual – an expression of their doubts, reservations, and ultimately, appeals for some kind of a sign about what they should feel and believe in – and that guiding voice, the idea of faith, that people attribute to a higher power.

RYL:  You are based in Dubai, how do you live its rock scene? How much this city gave/is giving to you, musically speaking?

Empty Yard Experiment: The local scene has been blossoming into something very exciting in the past couple of years, and we have been thrilled to be a part of this evolution.

However, the level of overall support and resources for local artists leaves a lot to be desired. We have been extremely privileged in obtaining the support of Red Bull, who are deeply committed to backing and growing talent in the region.

On the other hand, other local artists are not so fortunate and tend to struggle to produce their own material and gain exposure because of the many limitations that they have to endure – both financial and otherwise.

Sadly, however, if local rock bands want to make anything of themselves, they have to break out beyond the borders of both the UAE and the Middle East and work on generating exposure for their work to an international audience. It’s as simple as that. There are only a couple of good venues around town that provide bands with decent equipment to perform with – and they have been doing their best to support local bands at times – but this is far from enough to sustain a healthy scene.

RYL:  Are you planning a tour soon?

Empty Yard Experiment: Yes, we are trying to arrange for dates in Europe, India, and possibly Australia.

RYL: Which is the “void that you know far too well”?

Empty Yard Experiment: Our band respects our listeners’ freedom of choice, especially when it comes to interpretation of our songs and lyrical themes. On the other hand, the raw soundscapes created in our instrumental tracks gives the audience an opportunity to form their own subjective understanding of what that particular piece is supposed to portray.

And a title like “Lost In A Void That I Know Far Too Well” is supposed to give them a faint indication and then let them set off on a journey of their own.

RYL:  Which is the verse (written by you) that you like the most? Why?

Empty Yard Experiment: It’s always hard to make that kind of choice because we always aim even higher to paint an elaborate picture with each song that we write. There are also five of us in the band, so the answer this question will be far too lengthy J

RYL: Last question, tell us everything about the song “Greenflash”

Empty Yard Experiment: Just like other songs on “Kallisti” are about the various ways in which an individual relates to various themes of importance in their lives, “Greenflash” chronicles one’s perception of power and, more specifically, oppression. It is about the voice of a people, and the manner in which the idea of justice and equality are perverted on a daily basis across the globe.