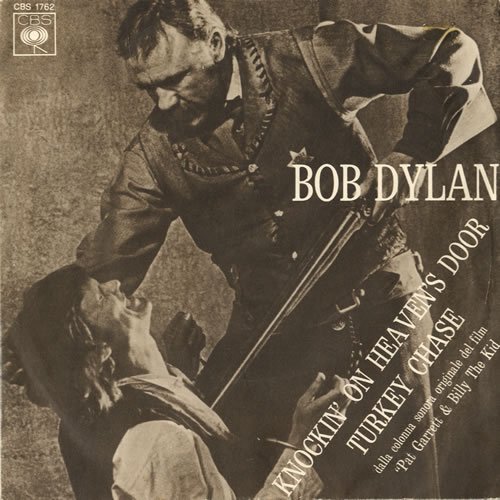 We waited quite a lot you must say……. but good things come always respecting their times………

Today is the day of the poet of rock n’roll, Mr Robert Allen Zimmerman a.k.a. Bob Dylan.

What we can ask more from a man? to sing maybe….?

Bob Dylan indeed did also that.

Knockin’ on Heaven’s Door is one of the most important songs in his career, even if politically not relevant, it has been written in 1973 as a soundtrack of the movie : “Pat Garret and Billy the Kid”.

Bob Dylan will also play a little part in the movie that , at the end, will not achieve a great success with the public.

The song talks about Pat Garret (that became Vice-Sheriff ) that , even if friend with Billy the Kid, had to use his weapon against him.

So he ask his mama to take the badge off him , he can’t use anymore….he killed a friend.

and here the 1987 version of Guns and Roses: