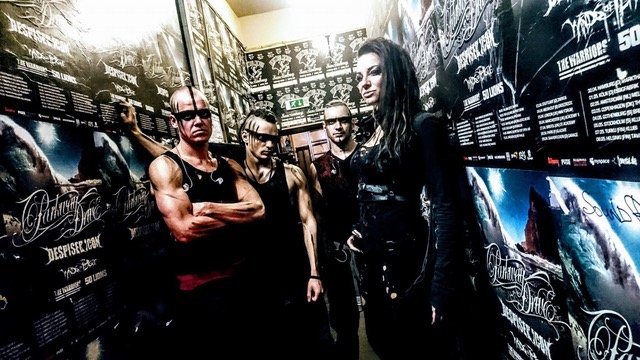 Let’s talk about your new album “KOMA”  released last year….is there a link/something that connects all the lyrics of the album?

My main inspiration for our first long-playing record “Koma” was the political situation in Europe. Born and raised in Berlin (West), I grew up free and was taking advantage of our societies great values, such as: democracy, equality, secularism and our human rights.

Due to our ignorance and laziness most of us have unlearned that all these great values should not be taken for granted.

We choose the title “coma” which represents a state of unconsciousness in order to symbolize our own blindness and infatuation. As a historical „wake up call“  like this can be painful the songs are loaded with a huge degree of anger, fear and desperation.

We are tired of all the “too-gooders” in Germany who are keeping watch in quest of the wrong enemies. We don´t want to victimize ourselves and get an independent and truly informed view on our lives. Politics are becoming more and more a joke.

To call Germany an intact democracy would be very naive in my eyes… Everything´s impermanent. Germany makes big efforts to go “down the drain.”

No. I think this is exactly the task we all swelter at. But music is not necessarily a private psycho – session. I don’t put my self “on the couch”. There should always be a difference between the poetry and the autobiography.

On the other hand, if we as authors don’t “let the pants down” and show our true self, what else could be interesting and touching and – foremost- credible for anybody supposed to react?

I started my career with a major company record deal at the age of 20. Since literally everything in this project was a rip-off, I can only say: Thank God it was never released.

After a barnstorming failure I got out of this deal with terrific debts. But I survived and started to work as a producer. I soon found out how much freedom this job would give me as long as I ignored all advice and requirements of the music industry. So I became the odd one out, but I took every project as the next milestone towards my great “heart project”.

Null Positiv. And here we are… Broke, fucked up, written off, but free and substantial!!! 🙂

It was the sound of the wind in the trees when I took long walks with our dog.

It was the laughter of me and my friends welding bicycles out of junk.

Could be Jimmy Hendrix as well as Led Zeppelin, James Brown, The Pogues, Black Sabbath and Pink Floyd, but also classical music that my parents were listening to or some cool jazz.

A happy birthday song with my girlfriends name on it.

Sorry, too many songs…. One big time song is „hurt”

“Wish you were here” by Pink Floyd…amazing words. Tori Amos “Winter”, “I Surrender” by David Sylvian, “Beautiful Freak” by Eels, “The Weeping Song” by Nick Cave and the title theme of Sesame Street.

What inspired “Das Virus in Dir”?

A funny discussion with Elli Berlin who suggested to write a song comparing mankind with a virus. I said: “but this is too much of a cliche for me… WE ARE NOT A VIRUS !!! Because we are capable of making decisions!!!!”

So we wrote „Das Virus in Dir…“

Do you remember the day you wrote “Hass”?

Well, one of my main disturbances is anger. Since I was a young boy, overcoming anger was a big task for me. I don´t remember the day I wrote the song but I know that it means a lot to me.

There are times or moments when you can do what ever you want but things will collapse. Maybe you’ve done everything right but you’re just doomed to failure. Sometimes in history there were many signs of decline, many warnings and predictions. But still the mindless crowds walked like lamps to slaughter and it seemed unstoppable.

This can drive you crazy!!!! I just had to let off some steam.

It was private show… *wink*