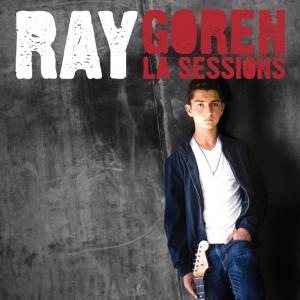 RYL: “LA Sessions” is the title of your new EP, which is your musical relationship with the City of Angels?

RAY GOREN: I was born in New York City and moved to CA when I was seven. I started to play music when I was very young and living in New York. LA gave me a real boost.

After sitting in with a band for two songs when I was nine, I met more people who invited me to sit it..and this continued almost each time I played. LA gave me a chance to sit-in and meet some of the best musicians in the world. It gave me a chance to watch them, to listen to them and to play with them and get advice. I met a lot of people by chance in LA.

For example, I met Eddie Kramer at a neighborhood club where I was playing. We talked and eventually he produced LA sessions. Once when I was ten I was at a jam. I was on stage playing when Slash walked-in. We later talked a lot. Stuff like that can only happen in LA. So I can say that LA has a big part in my musical development because of all the people that I met here.

RYL: “You Gotta Learn” is the title of the first single……. What was the best learning you had until today?

RAY GOREN: I think that the best learning that I had until today is to be nice to everyone and humble. I noticed in meeting many people that in terms of music the most famous or best musicians that I met were always super nice and humble.

The learning for me is that everyone deserves being treated well and I try to live like that.

RYL: How did you write the song “Memories”?

RAY GOREN: I do not like to talk about the meaning of my songs because I want the listener to related to the song without knowing what I wrote about. Memories is very special to me about a very special situation. I wrote it by writing the chord changes and then the melody and lyrics just came as I was thinking about the situation that was involved.

RAY GOREN: Really the basic lyrics of a song just come to me as I think about the situation. But then I have to complete the lyrics beyond the first lyrics that just pop into my head. Then I have to edit.

RYL: Which is the best guitar advice you ever received?

RAY GOREN: Robbie Krieger of the Doors met me backstage once and then later he invited me to play with him a number of times at special events, usually events where the proceeds go to charity. He told me once after one of those events that I play great but that there are a lot of great guitar players and that to be a musician I should not only focus on the guitar but I should also write songs.

I think to me that was the best guitar advice that I received.

RYL: and the best guitar you ever played?

RAY GOREN: I love my guitar “my number one” it is a white Stratocaster made in the USA that was made to look old and used. I fell in love with it the first time I played it at the store.

I kept thinking about it for a few days and finally my dad agreed to get it for me if I don’t ask him for another guitar for a few years. I knew that this guitar was it. It has been my “go-to” guitar since then.

I have played other guitars but my white Strat that I got when I was ten is the one for me.

RYL: “Save my Soul” is the single you have released as first…..so young and in need of be saved already? 🙂

RAY GOREN: I hope I don’t need to be saved yet. But the song is about “save my soul” because “I will sin before I get old”. I know I will face a lot of temptations in life and I hope I will saved from doing things that hurt others, hurt myself and hurt my career as a musician.

RYL: 24th june, is the release date of your EP, which emotions are running in to your body?

RAY GOREN: The emotion for the release of LA Sessions was great excitement. I think up until LA sessions people saw me as a young person who plays guitar. LA sessions is just the beginning.

I love to write songs just as much as I love playing guitar. I am already working on more original music because I have written over 40 songs already.

I hope people enjoy LA Session so that I will be able to record and release more of my songs.

RYL: Tell us about the upcoming tour…

RAY GOREN: We are just putting a band together that will play my original music. Once I feel we are tight enough we hope to get on a tour as an opening act to support another artist.