We can’t believe on what we just heard! This summer Vans Warped Tour will have its final round after 24 years of great music.

Kevin Lyman, founder of the tour, just announced it on the tour website….

“I have been a very lucky person to have traveled across the country and sometimes around the world as one of the founders and producers of the Vans Warped Tour. Today, with many mixed feelings, I am here to announce that next year will be the final, full cross-country run of the Vans Warped Tour. I sit here reflecting on the tour’s incredible history, what the final run means for our community, and look forward to what’s to come as we commemorate the tour’s historic 25th anniversary in 2019.

In 1995, I had already worked many years in the music business, including spending four summers on the Lollapalooza tour, and I thought, ‘for one summer I would like go out and put on my own show’ mixing music and action sports. With the support of so many people, I have now spent the last 23 summers bringing that show to a city near you. We have brought that show to over 11 million people around the world and watched that same world change while doing so.

I have been proud to work with so many artists who have grown to be some of the largest stars in the world. Countless bands have played in hot parking lots and through summer storms for you at some point.

Bands like Quicksand, Sublime, L7, No Use for A Name and No Doubt jumped on in the very first year.

Touring many summers with my friends and peers like – Pennywise, Social Distortion, NOFX, Bad Religion, The Descendents, Less Than Jake, Dropkick Murphy’s, The Bouncing Souls, Rancid, Flogging Molly, Anti-Flag and The Offspring are just some of my fondest memories. More include, having Blink-182 travel on my bus in 1997 when the world opened up to them and made them the superstars they are today.

The Vans Warped Tour was the platform to witness the rise of pop punk with Sum 41, Simple Plan, MXPX, New Found Glory and Good Charlotte.

The birth of Emo – with bands like Thrice, Thursday, The Used, Taking Back Sunday, The Starting Line, Motion City Soundtrack and Jimmy Eat World.

Fast-forward to the summer in 2005 when TRL and Warped Tour helped launch the careers of Fall Out Boy, My Chemical Romance and Avenged Sevenfold.

I witnessed Warped alumni like The Black Eyed Peas, Katy Perry, Big Bad Voodoo Daddy, No Doubt and even Kid Rock play the Super Bowl. I’ve even had the pleasure of seeing Green Day play the Rose Bowl.

More recently, I’ve watched bands start out on a small stage and work their way up to the main stages by meeting as many fans as possible and continuing to hone their craft while on the tour. Bands like Paramore, A Day To Remember, Sleeping With Sirens, Pierce The Veil, Echosmith, Motionless in White, Black Veil Brides, Every Time I Die, Neck Deep, Beartooth and so many more.

What has always made me proud was when I read that Warped was the most diverse show of the summer where you could find Eminem and Ice-T on the same stages as Sevendust, Pennywise, and 7 Seconds.

I am so grateful to have worked with more than 1,700 bands over the last 23 summers. I wish I could thank every band that has played the tour.

The Vans Warped Tour has become the community I had always hoped for. We have worked with over 90 non-profits each summer shining a light on new and growing groups giving our community the resources they need to connect with people who can help them, but also encourages our community to help each other. To Write Love on Her Arms, Music Saves Lives, Feed The Children Now, Keep a Breast, Hope For The Day, Canvas Foundation, Living The Dream and A Voice for the Innocent have built their organizations from the Warped Tour parking lots across the country. This even inspired me to start my own foundation Unite the United.

The work we do each summer on “give back days” has become part of our DNA. My brain is etched with the image of the church ladies after Katrina serving beans and rice to The Casualties with their upright mohawks, finding a common ground where no one was judging anyone. Then finding out the only working business in the county seemed to be the moonshine still and the locals showing up with a crate to share with the crew later that evening.

The long hot days that ended around a BBQ with food, drink and more music are some of the best times. Enjoying the days off, taking people jet boating, house boating, river rafting and sometimes even skydiving. I witnessed lifelong friendships being made, sparks of romance that led to ‘Warped weddings,’ and unfortunately now, more notices of passings where a proper good bye was not able to be said.

I want to thank my supportive family who has been through the highs and lows, Darryl Eaton at CAA, Steve Van Doren and Vans, Kate, Julie, Allison and Steph. My hard ass working crew who puts that show up and down each day, the sponsors which without them this tour would not happen, the bands and their crews, the promoters who took a risk on us at the beginning and continue to be supportive.

It will be bittersweet each morning when I see the sun rise and then watch it set knowing that this will be the last time I get to witness it from that exact spot.

Though the tour and the world have changed since ’95, the same feeling of having the ‘best summer ever’ will live on through the bands, the production teams, and the fans that come through at every stop.

The enduring spirit of the Vans Warped Tour remains as bright as ever, continuing to inspire creativity and ambition in new and exciting ways as we prepare for a 25th anniversary celebration in 2019.

I truly look forward to seeing as many of you as possible during this final cross country run, and getting to thank you for your support on this wild adventure. Until then, take care and be safe.”   – Kevin Lyman (Founder of the Vans Warped Tour)

Warped was responsible for introducing music fans to such artists as No Doubt, A Day To Remember, Katy Perry, Blink 182, All Time Low, Pierce The Veil, My Chemical Romance, Eminem and Fall Out Boy, among hundreds of others. 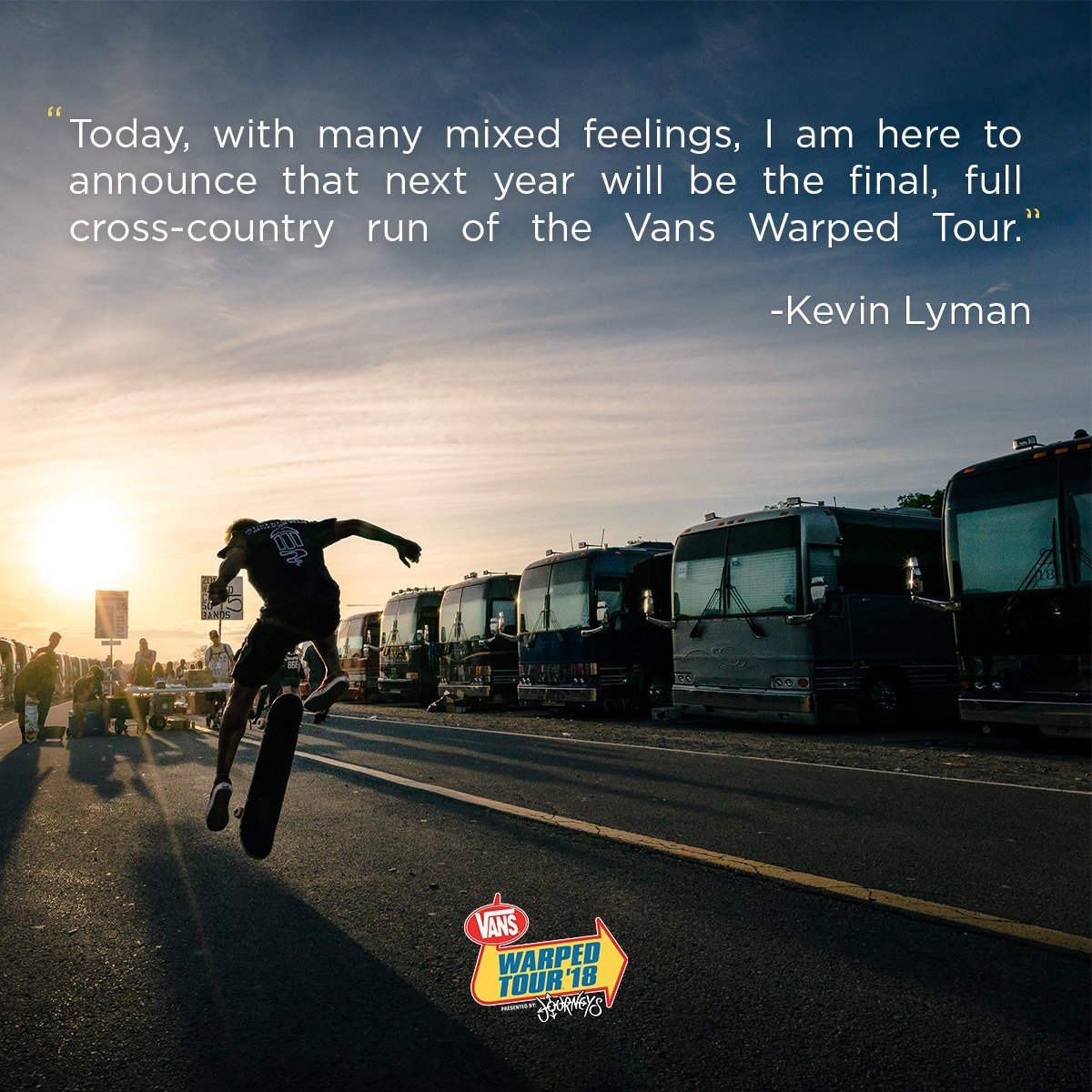 The Vans Warped Tour is established as America’s premiere traveling music and lifestyle festival of the summer, breaking up-and-coming indie talent as well as showcasing major established artists since 1995.

It is the first tour to consistently use innovative environmental concepts every year on the road.

The nationally-renowned festival has become an icon for youth, punk rock and skate culture bringing together a diverse lineup of artists, stemming from every genre, for the summer.

For more information on the tour that Alternative Press readers voted the “Best Tour/Festival” of 2012/2013 and Rolling Stone called “America’s most successful festival” (2005) go to: www.vanswarpedtour.com.