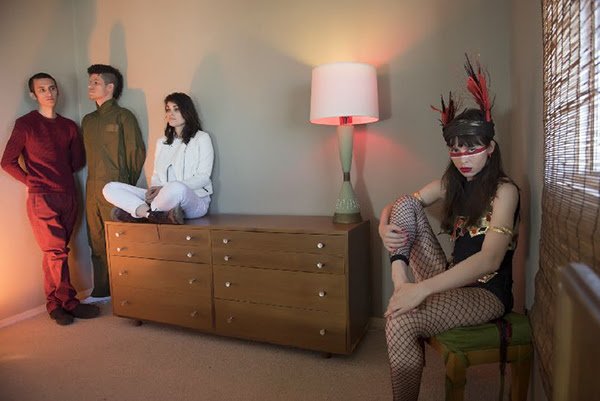 About the song, singer Teri Gender Bender says: “’mother/HOLDS’ is an ode to the eternal bound between mother and daughter, despite how volatile and erratic the relationship may be. Sometimes the umbilical chord is never truly cut off. Sometimes the mother’s milk is filled with panic too”.

She adds: “It was such an honor to be able to work with some of my best friends on this music video, Alice Bag and CocoVera (Janelle Obert and Alejandra Robles Luna) and Stars At Night, not only are they great human beings but also such thrilling artists. By the end of the filming shoot on set the experience helped me find a release of tension I’ve been craving for so long”.

Alice Bag shares: “Somewhere deep down in our psyches, many of us have had moments when the urge to metaphorically kill our mothers has bubbled up to the surface, times when the unthinkable taboo of matricide is weighed against independence and it feels like a choice between mommy or me. When we were recording this song, I was imagining the long, difficult and painful task of severing the invisible umbilical cord that tightens uncomfortably as we grow into self-reliance“.

“bi/MENTAL” is the band’s most personal album to date and an ode to frontwoman, Teri Gender Bender’s mother, as well as a dissection of the meaning of family and a personal story about mental health. It was produced by iconic Talking Heads‘ member Jerry Harrison (No Doubt, Violent Femmes, KD Lang) and recorded at his home studio in Northern California. Purchase/stream “bi/MENTAL” HERE.