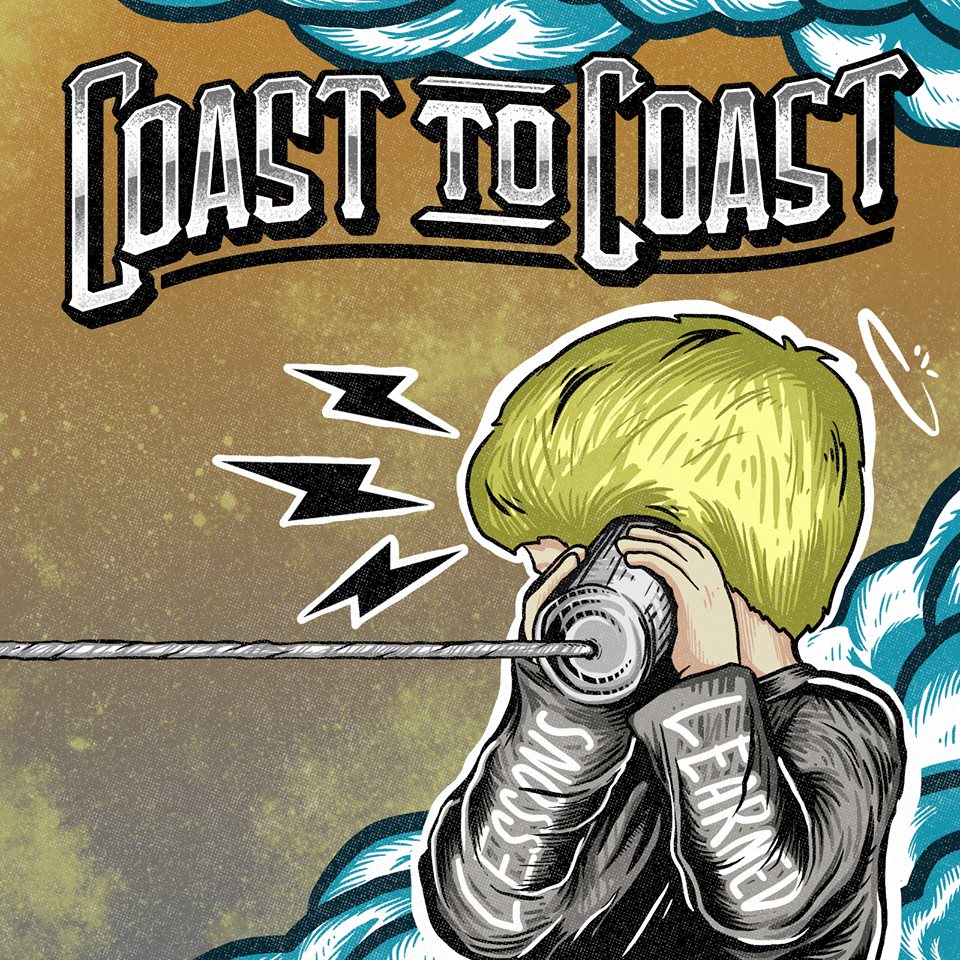 RYL: Your new EP is titled “Lesson Learned”, what it means to you lyrically speaking?

Coast to Coast: ‘Lessons Learned’, as the title brings across, is about change, about reflection, about taking steps toward something better. I think the lyrics are absorbed by every member a bit differently and I’m happy that’s the case as it’s more personal and may help people through different situations.

For me (Brent), the album reflects a world that is realizing a change; a world that wants to move forward, that wants to let go of the strings that bind it, reaching toward the future to live within reciprocity and collaboration. It’s an album about us all and the journey we are taking together.

RYL: Tell us everything about the song “Gravity”?

Coast to Coast: Gravity is about the destructive lifestyles which we can often find ourselves in, and the addictions (substance and otherwise) that we can be drawn to in order to fight or hide the reality of how fatal those lifestyles can be.

Once we realize and come to terms with that reality, we are brought down to earth and have an understanding of the consequences associated with it.

Coast to Coast: There is definitely a common drive that they all share; the drive of trying to make the world a better place, or at least to give people something to think about, or perhaps even something new to realize.

Coast to Coast itself started in the fall of 2011, but the current lineup came together at the start of 2014.

Coast to Coast: We all contribute to the writing process. Almost every member can compose but we prefer to do it together.

Typically Chris or Tomo will have some guitar riffs that they’ve jammed with Yuichi. Matty and I will listen to those and give input and we’ll go from there.

Lyrically, my concepts are rooted in the influences I receive from bands I like, including Japanese artists, as well as the studies of many great thinkers of history, and of course, life.

RYL: Do you remember the day you wrote “Veil, Visions, Fading”?

Coast to Coast: “Veils, Visions, Fading” started out with us just jamming in the studio—kind of like I mentioned above.

Thus the first lyrics that came into the song were then as they are now.

Coast to Coast: For me it’s the meanings of the songs and how those meanings are projected or conveyed to the listener, but at the same time can affect me as an artist.

Maybe the music I’m a part of can help someone who listens, but in turn their support for it helps me. It’s a great thing.

Coast to Coast: For this EP in particular I would say my favorite is “When we find that we’re the tide that breaks this finite line, we will find what lies within our fragile minds. I don’t want to be like this, another chance another miss, I wanna be the end before this ends.”

Coast to Coast: We’re currently in the process of writing for an as-of-yet undefined full-length. I have ideas and blurbs for each of the songs the rest of the band is jamming, but nothing really ‘complete’ yet. So, I can’t really answer more than that at the moment haha.

Coast to Coast: Starting in July and then through August and September we’ll be hitting the road here in Japan to get word out about the release of ‘Lessons Learned’.

We’re also currently in the very early stages of planning a U.S. tour for March or April of next year.

RYL: What inspired “Here and Now”?

Coast to Coast: Sometimes to reach a certain point that we’ve always wanted to reach, we just need to take that last step.

That last step might stop us in our tracks, and we might even feel like we don’t have the strength to take it, but the only thing holding us back is ourselves.

We all have a chance to move on. “Here and Now” is about taking that last step.