Lift You Up – Interview with Tonia

Let’s talk about your new EP “Lift You Up” has just been released… is there a link/something that connects all the lyrics of the album?

The theme/link of the album was inspired by the title track “Lift You Up” once I realized each one of the songs were healing mechanisms in some way for me. I was lifted from low places by writing each song and I find that there is that common thread amongst all of them.

Being vulnerable and open about my personal experiences has always been difficult for me. Overtime I learned to own my experiences and realize that there’s no shame in my story. In owning my story I’ve been able to build up the courage to be vulnerable. Although it’s scary and not easy, I’m finding the reward has been worth the risk.

I feel like I’m just now getting a taste of what the industry is like, though I have been working in this business for so long from a purely artistic perspective. Detroit was good to me in that way. The culture of music in Detroit places importance on the art form above anything else. Now that I’m in New York City and meeting so many folks whose take on the business is a bit different, its been a lot of fun understanding the many ways to have success. I believe there’s a lane for every artist in this industry; it’s just a matter of knowing who you are, finding your audience and developing relationships with people that value you for who you. 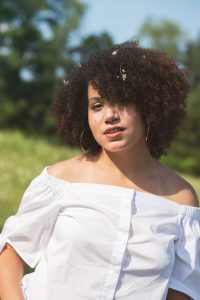 This is tough, there so many choices haha but I’d have to pick the one album I remember my parents playing constantly – Kirk Franklin – Nu Nation Project.

Right now it’s between “Cherry Wine” by Hozier and “He’s Fine” by The Secret Sisters.

I came from what some folks describe as a “Broken home” growing up. The root of the inspiration for “Home” comes from the feeling that I didn’t have a safe-place to go to when I needed to escape. My mom reminded me one day years later that a home isn’t always a tangible place and that it’s a feeling of safeness and comfort. I was moved by this in a cathartic way and wrote the song.

Do you remember the day you wrote “Sad Song?”

I do remember the day I finally was able to tie the lyrics together in a way that I felt communicated exactly how I felt. This version of “Sad Song” is probably the 10th version because I rewrote it so many times. I was deeply disappointed with yet another failed relationship and that’s when the lyrical concept came to me. The song helped me realize so much about myself.

What inspired “Break Everything?”

I’ve had the chance to play a lot in NYC since I’ve moved here and I have to say that the best show I’ve played has been a recent one in Queens at Sweet Afton. The crowd was amazing and the venue was beautiful. There was just this energy in the room that made me feel so free on stage more so than I’ve felt before.

My plans are to play even more shows and start recording all the new material I have. I’m really looking forward to sharing more music with the world and my supporters!