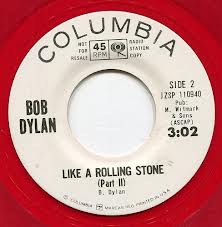 It is finally time for Bob Dylan’s masterpiece (in our opinion): Like A Rolling Stone.

It was released back in 1965, by a young (24 years old) Bob that released it as part of his sixth studio album called “Highway 61 Revisited”.

At the beginning the radio didn’t want to play it, do you know why? because it was revolutionary? No….because it was too long! (remember those days the song had to be maximum 3 minutes and few seconds….) Like A Rolling Stone is, in fact, six minutes thirteen second long.

The song talks about a woman/girl that was part of the high society but, almost suddenly, she fells in disgrace.

For this reason Bob addresses to her the question: “How does it feel? ” and calls her “Rolling Stone”.

All that she was watching before with disgust is now part of her world and she has to come to compromises.

The song reached number 1 in the charts and it is considered the best , if not between the first three, rock and roll songs of all time.

Many covers have been done in the last 48 years….here some: