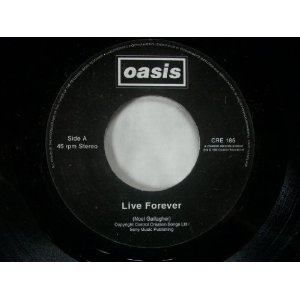 The season of Brit Pop: The Verve, Blur and the most famous band, formed by two brothers, Liam and Noel Gallagher back in 1991 in Manchester.

The two brothers had a very conflictual relationship since the beginning….. a relationship of love and hate that turned to be very creative (the band won several prizes as MTV European awards, NME awards, Q awards, Brit awards and Grammy nominations).

Today we will speak about ” Live Forever” that , not only had a huge success but also changed the story of the Band; the first song entirely written by Noel.

One night, while listening to the Rolling Stones song “Shine a Light” he wrote the first verses and not so much later the song was played live .

The public just loved it, even if different from the first songs of the band; it talks about Noel’s mom Peggy and about LOVE  (but also friendship) that lives  and lasts forever.

Unfortunately the Band, after an altercation between the two brothers that happened during their tour in 2009, split (few members left already in 2000).

Now Noel and Liam funded their own bands and they are touring the world…….we, in Rock Your Lyrics, hope to seem them soon together……. they own us one concert!! ( we were supposed to see them in Milan live back in 2009 but they split just before the Italian gig ).