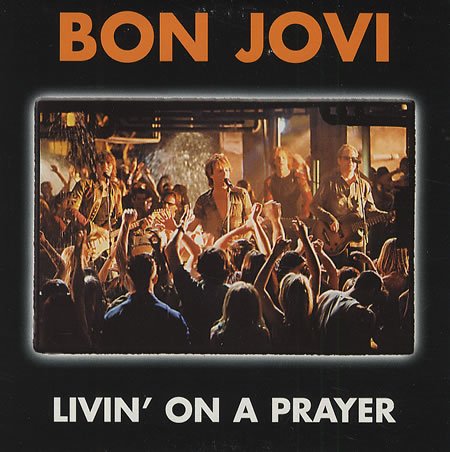 Livin on a prayer

Glam Rock or Hair Metal….. Bon Jovi , american band from New Jersey,it is obviously the band most representative of the all genre.

John Bon Jovi funded the band in 1983 (this year will be the 30th anniversary of the band) together with the guitarist Richie Sambora, the drummer Tico Torres and the keyboardist David Bryan .

As of now the band has sold over 140 millions copies with 16 albums and won several awards like Grammy, American Music Awards, MTV music awards and many more.

Sambora and Bon Jovi are the two mind behind all the lyrics of their songs.

Livin’ on a Prayer is the second single published from the album “Slippery When Wet” dated 1986, only 3 years after the band has been created…..this album sold itself over 29 millions copies worldwide.

The lyrics have been written by Bon Jovi, Sambora and Desmond Child (songwriter that wrote song also for Aerosmith, KISS, Alice Cooper and many more) that cooperated to the creation of the album.

John was reluctant in including the song in the album at the first moment but then decided to do since the band like it particularly.

The song has been written during the Regan Presidency , during a moment of economical depression, and talks about a couple that tries to survive after that he lost his job.

They will make it for love, even if she cries at night and he doesn’t know when he will be able to find work again.