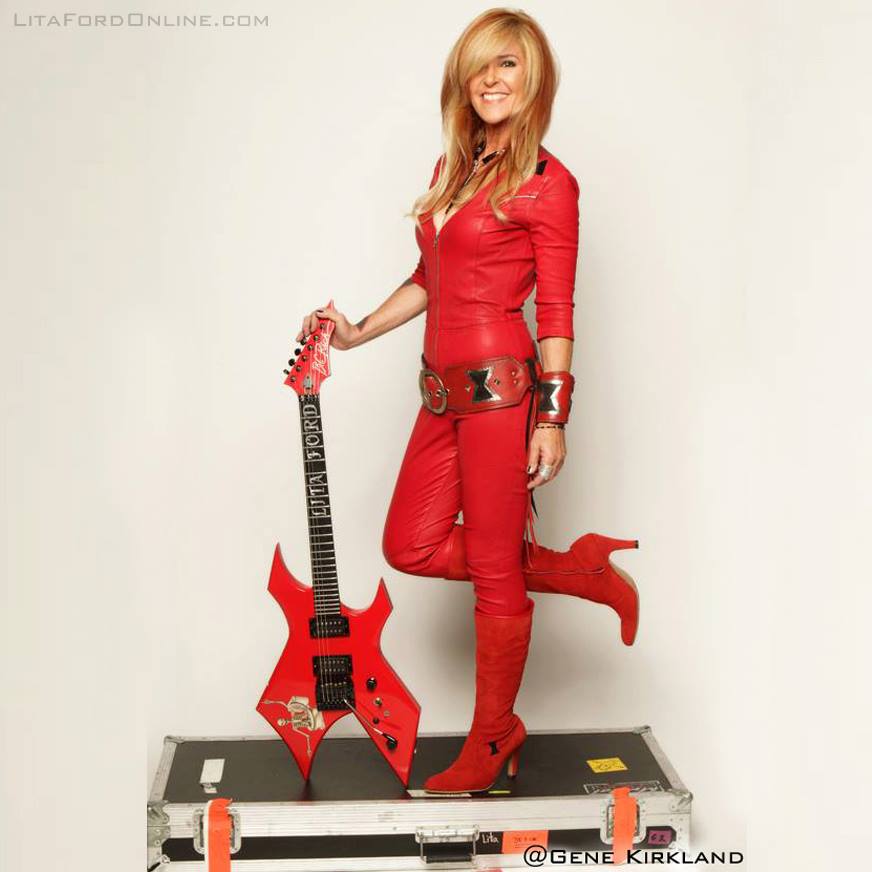 Lita Ford (http://litafordonline.com), former guitarist of the The Runaways, is about to release a new live album and a very special surprise….

RYL:  Let’s start with the upcoming show that will be held in the glorious Whisky A Go Go in LA next week where you will perform supporting  “Rock Against Multiple Sclerosis” , what do you expect from that show?

Lita Ford: We hoped to raise money to study  a disease that people are unfamiliar with. MS , has taken lives of so many people.  There is no cure.  The money goes to help study this horrible disease.

RYL: Being a RockStar doesn’t mean only doing great music, being on tour, inspire fans and crashing hotel rooms (sometimes it happens 🙂 ). It is also important what we do, what is happening in the everyday life, in this regard you are very active supporting Parental Alienation Awareness, can we ask you why this topic is dear to you?

Lita Ford: I have lost my children due to parental alienation. The effect it has on the child and the alienated parent is life altering for the worst . It is legal world wide, yet I believe it is a silent form of severe child abuse and needs to be stopped ASAP. So many people are ‘’beyond suffering’’.. Bruises that don’t show. God only knows how deep they go.  Alienation is where the parents use the child as a weapon to hurt the other parent. As in my case. Usually in a divorce or break up.  Because the child is what you love the most,  the alienating parent knows this is what will hurt the non alienating parent the most ! Taking away their child.   The courts make a fortune off of desperate parents trying to save their children from this abuse, yet they continue to watch these children be torn apart.   We need to out law this.   Sticks and stones may break my bones but names will never hurt me…..who ever came up with that phrase needs their head examined.  LOL.

RYL: Let’s go back to the music, a new live album is set to be released in November this year, what we should expect from it? What do you particularly remember of that night?

RYL: The title is taken by the great song of Elton John “The Bitch is Back”, in fact is the second album that you released in  18 months….what is next? Are you working on new songs?

Lita Ford:Yes,  after the release of the THE BITCH IS BACK ‘’LIVE’’, we have a Christmas single coming out, written by Lita Ford and Mitch Perry.’’my guitarist’’

It is a duet with myself and Cherie Currie singing. Cherie and I have not worked  together since 1978. It’s a killer, rocking Christmas song. I also am in the process of working on a  An autobiographical book for Harper Collins with co author, Marissa Matteo..

RYL: The song “Hate” included in your last album “Living like a Runaway” is talking about a boy that grew hate and violence since he was kid; this song was inspired by a true story?

HATE also refers to the killings and shootings in collage’s , theater’s and school’s. These people come from mentally dysfunctional families. Because of Hatred.   It was originally inspired by the movie, Natrual Born Killers.  Something that is not natural. Unless you are an animal.

RYL: Obviously the title of the album bring us back to the Runaway time, what is the best learning you got from that experience?

Lita Ford: The Runaways taught me a lot.  It was like going through Rock n Roll collage to learn how to be the real deal.

RYL: “Close my eyes Forever”, part of the 1988 album “Lita” is one of your major successes, what inspired you while you were writing its verses?

Lita Ford: Happiness, craziness, being a rocker, parties, getting laid, getting paid and being a chick !

RYL: Do you have a particular way of writing lyrics for your music?

Lita Ford: No rules in writing a song. What ever works for you. I like to come up with a title first.   Then add to it by writing a great chorus or hook based around that title.  Arranging the song is important for the listener. You don’t want to lose your listener anytime during the listening of the song. If he starts to look around the room or look at his watch, you ‘ve lost the listener.  LOL.

RYL: “Gotta Let Go” is one of our favorite songs, do you remember how you wrote it?

Lita Ford:I had the riff first. This song was based around the beginning riff./ cords.

RYL: We hope you agree with us when we say that Ritchie Blackmore was not only one of the greatest guitar players but also a great hard rock innovator, but that was fifty years ago…..How it is difficult today to create something new and original with the guitar?