Once again, the most colourful and craziest shenanigans at Lollapalooza Berlin are happening at the Lolla Fun Fair. Around 200 acrobats, performance artists and weirdos galore from all corners of the globe will let your imagination run wild. 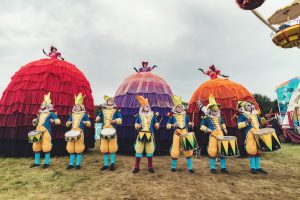 They’ll arrive from New Zealand and Australia as well as Spain, France, Great Britain, Italy, Hungary, the Netherlands and Germany, of course. All performances will be even more exceptional than in previous years, and all the many acts will lure you in; with unexpected and never before seen performances.

Dive into a world of extraordinary creatures and odd characters, and embark on a journey that tickles all the senses – some of which you didn’t even know you had.

Make your festival Absolut! Join us at the Absolut Lolla Fun Fair – the home of fancy ideas, creativity, and imagination. Meet creators, artists, and friends to celebrate our new Absolut Lolla festival drink. How does it taste? You have to try it yourself! Take the chance to make memories you’ll never forget. Make your Lollapalooza #absolutlolla! #enjoyresponsibly

Special thanks go to the Berliner Bäder-Betriebe, which made it possible for Lollapalooza Berlin to use the areas of the summer pool and the Frauenwiese by the Olympic Stadium and the Olympic Park. We are very happy to have these as a unique and special part of the Lolla Fun Fair area.