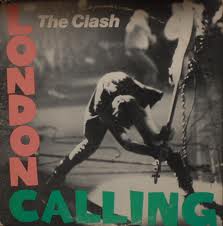 The real name of Joe Strummer is John Graham Mellor, it became Strummer because he was used to “strum” his guitar in the subway of London.

The name of the band is real punk: clash the system, clash of a new youth generation that needed to be listened, needed to express itself.

Together with Strummer (lead vocalist) Clash was formed by other members as Nicky Headon (drums) and  Paul Simonon (bass guitar).

Simonon himself will be credited of selecting the name of the band while he was reading some newspaper.

London Calling is a song part of their third album released in 1979 , that was awarded as one of the best album of all times.

The songs included in it were really political, talking about differences between races, youth rebellion and unemployment.

The title “London Calling” is inspired by a radio very famous during World War 2 that was the “voice of freedom” for many occupied countries.

Jones and Strummer wrote its lyrics and these are referring to many episodes happened during those years:

The song sold over 6.000.000 copies, the cover of the album with Strummer that smashes a guitar is an emblem for the entire PUNK generation.

Now, 33 years after the release of London Calling, do you still leave by the river?