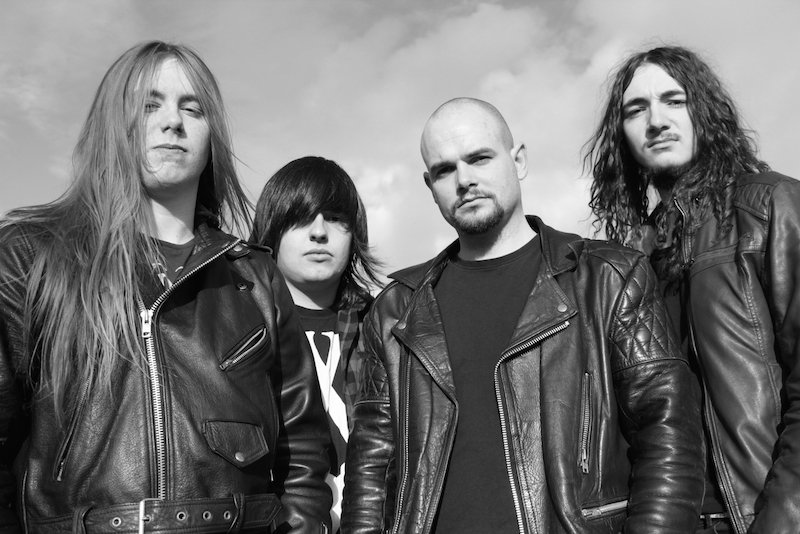 RYL: 27th of april, few weeks and you will release your new EP “Loud, Hard and Fast”, what it means for you?

Bulletproof Rose: It means a great deal. We have been playing the songs on this EP for a long time now and we have invested a lot of time into turning them into the songs you will hear on the record, as well as spending a considerable amount of time trying to find the right studio and the right producer to create our record with, so to see all that work and determination finally come together in the finished EP is really gratifying.

Bulletproof Rose: There isn’t a specific object or place we need to write our songs, but most of our material comes out of our practice space and many of our songs are a team effort no song is written solely by one person.

That being said the very fact we are all together when we write could be viewed as a specific need.

Bulletproof Rose: Not particularly if there is then it is summed up perfectly by the title of the record it’s just Loud, Hard and Fast Rock n Roll.

RYL: Do you remember how the lyrics of “My Girl” have been written?

Bulletproof Rose: Well the idea came from a friend of ours who’s girlfriend wasn’t really ‘doing it for him’. So we based the lyrics around that situation.

Bulletproof Rose: Well usually one of us will have an idea for a riff or a chorus line and then the music is written based around that, once we are happy with how the music is sounding we turn our attention to lyrics, unfortunately lyrics are not the easiest things in the world to write and sometimes it can take weeks for an idea to stick or for a line to appear that sounds like it belongs in the song, usually once the chorus is written the rest of the lyrics just flow.

RYL: Tell us everything about “Gypsy”..

Bulletproof Rose: everything? Haha that’s a tall order. Well the idea for the music came from our singer and co-Guitarist Jacob who came up with those powerful AC/DC like chord changes and similarly to the chorus of My Girl he kept thinking of the line ‘Gypsy! Gypsy Woman!’ And thus the song Gypsy was born.

Bulletproof Rose: we don’t over complicate our music. we want our music to be hard, powerful and to leave you wanting more. we don’t write our music with the intention of showing of our musical proficiency.

Bulletproof Rose: We have a lot of music in the pipeline as we don’t like to stifle our creativity, but we have two songs that have recently been finalized, one is entitled Use It Or Lose It, and the other The Grind and that’s all we will say about them.

RYL: You are planning a tour?.tell us more about it! Which surprises you planned for your fans?

Bulletproof Rose: Yes. we are looking to head out on tour around the end of June into the Start of July.

After gigging relentlessly for the past year and a half we have built up a substantial list of venues that we will be revisiting over this years tour taking us from as far north as Aberdeen to as south as London.

RYL: In which city you live? How does it contribute to your music?

Bulletproof Rose: well we are from Cumbria so we don’t really live in a city but we are from all over the west coast, Our Drummer Dan and our Bassist

Dane are from Workington, Guitarist Brian from Maryport and our singer/guitarist Jacob from Whitehaven. both Workington and Whitehaven were

Rock towns back in the day and both still have a small yet devout rock following.

We take our Hard rocking inspiration from the hard working background of both of these areas.