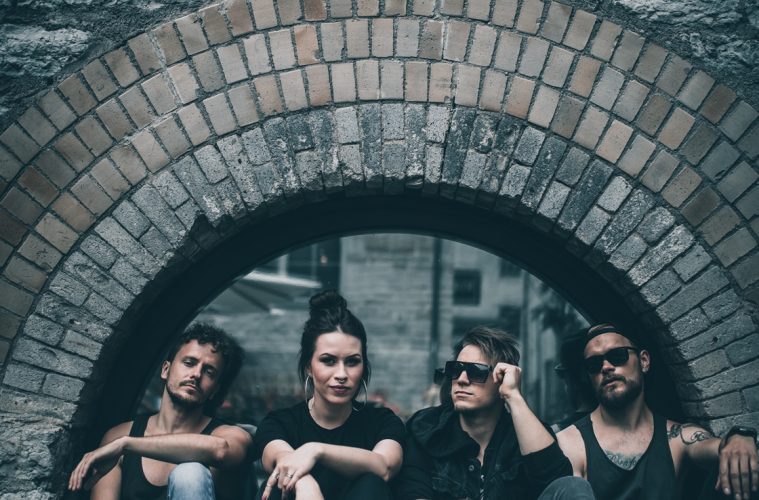 The inspiration for our lyrics usually comes from our everyday life. As always, the people in our life are the main source of inspiration.

To me the easiest way to write lyrics is when the instrumental of the song has some kind of a form already, verse, chorus ideas. This way it is much easier to come up with lyrics. Music inspires, especially the mood of the music. But sometimes the lyrics might come out of the blue without any music at all and then by a mistake it fits with an instrumental recorded a while ago.

The fact that you really believe in what you write.

Yes. To me it is quite hard, sharing the lyrics. When the song is ready, then it is almost okay.

It might be weird, and the guys maybe even don’t know it, but it is actually very uncomfortable for me to share my ideas, thoughts when the lyrics writing is still in progress. But being open through music is easier than just sharing my thoughts.

Every song that I have written has a special meaning to me. Each song expresses my strong thoughts about people, our/their behavior.

Is there a link between all the lyrics of the songs of your upcoming EP “Love Evolution”?

There is a story indeed.

At the beginning of the album it starts with finding someone/thing and keeping that feeling and loving that feeling of something new and exciting, but bit by bit it starts to fade, because we usually tend to forget our own needs in the process.

In some ways it is self-love evolution.

What inspired “Love on Fire”, part of your first self-titled album?

Actually, this is a song that SoS’s previous singer wrote. It seems that raw passion might be what triggered the lyrics.

This actually is the first song I wrote for Sounds of September. And it talks about the special people in our life.

Do you remember the day you wrote “Karma”?

Actually, it was a night. I think it was late fall, maybe November and it must have been about 1 or 2 am at night. I think I had only one sentence written prior. That night when I went to bed a bit too late and couldn’t fall asleep, at some point the lyrics just came and I wrote them down to my phone. The song was written in 10 minutes.

One row although was missing from the second verse until the day when we played the song together for the first time with the guys at our band rehearsal. Then Rauno, our bass player helped me with it a bit and Karma was finished.

Rauno has written some lyrics for our new EP as well.

ML: the best and the most difficult – changing our drummer this year
IM: Driving these thousands of kilometers is quite hard – you don’t get to rest well enough. And there’s never enough input slots in the audio interface.
RM: Drummer change this year was hard; the best moment – definitely, a milestone is that we were selected as competitors for Femme and got to play the Femme battle shows

We enjoyed writing our EP “Love Evolution”. We managed to make something we really like.

To play gigs, produce new songs. We also plan to organize gigs for the next year. Try to break more borders.

Also come up with more cool merch ideas and retail those, so that the fans and we also could wear and use cool products.