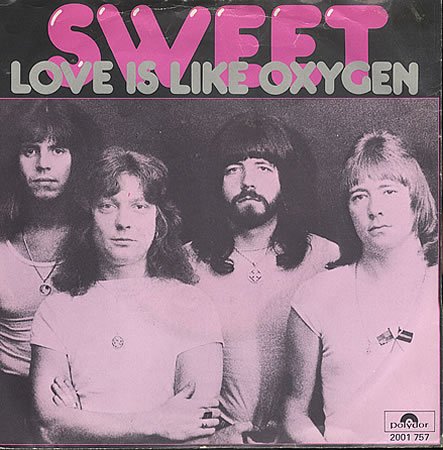 The Sweet were one of the first British Glam Metal groups, formed back in 1967 by thir singer Brian Conolly and drummer Mick Tucker and then, later joined by Steve Priest (bass guitar) and Andy Scott (guitar).

The discography of the band counts ten studio albums, the last one done in 1982 by only three of the four members and named “Identity Crisis”.

In fact Connoly left the band three years before, apparently because of problems with alchool, officialy because he wanted to pursue a solo career in the country music.

Sweet had an amazing success in Europe, especially in the continental part (like Germany), in fact their last album was released only in Germany and Mexico……at that time the band was not together anymore.

One thing that characterized the band is the fact that, after their break up, all the members decided to create their own “chapter” of the Sweet.

Basically, there was a time when Sweet toured with four different lineups at the same time!

Today, after the death of the funding members Connoly and Tucker, the Sweet are touring in their Priest’s and Scott’s versions in USA and UK.

“Love is like Oxygen” is their last success and it is also a song that ended the glam rock, leaving space to the Punk.

It has been written in 1978 by Andy Scott and Trevor Griffin (sound engineer) released as single and , in a longer version, in the album “Level Headed”

There wasn’t a clear explanation on how the lyrics have been written, they obviously talk about love and the necessity of having it as part of the life.

Otherwise it is like going around in the night, lost.