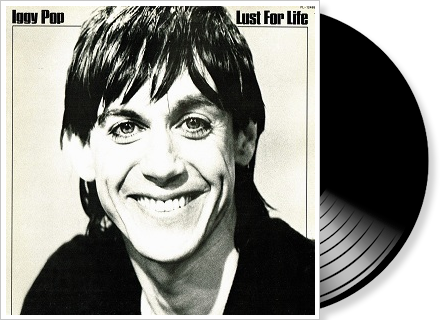 A carreer started quite early we would say, already at 13 years old, James ( the future Iggy) would start playing the drums in his high school band.

Now Iggy is 66 years old while his body and his energy are like the one of a man of 25.

Iggy Pop ( he started to give himself this name during the late sixties) , is consider the Godfather of Punk Rock because of his style that inspired all the major bands in USA (Ramones) like in UK (Clash and Sex Pistols).

From 1967 till 1973 Iggy played with The Stooges, a band that broke apart in 1974 (apparently because heroin problems of Iggy) and reunited in 2003 till date.

The career of Iggy has been caracterized by the strong presence of David Bowie that supported him trough his steps……sometimes in his music you can find strong influence of David’s sound.

The discography of Iggy is pretty big, as of today he recorded four album with the Stooges, one with James Williamson (guitarist and former member of the band), 16 solo albums, the last one  called “Apres” (after in french), an album of cover of french songs.

We expected a stronger “punk approach” on this album, more Iggy style……… surely it is a very particular experiment.

In 2010 Iggy and the Stooges were finally inducted in the Rock and Roll Hall of Fame.

“Lust for life” is the third album as solo player of Iggy released in 1977 and produced by David Bowie that will also play the keyboards and some back-vocals.

This song, later included in the famous movie “Trainspotting”, it has been written by Bowie and Iggy ; it talks about the self-distruction due to drug abuse but also about a possible redemption trough love and passion (lust) for life.

It is this lust that will save Iggy and David from drug abuse? We would say yes ……