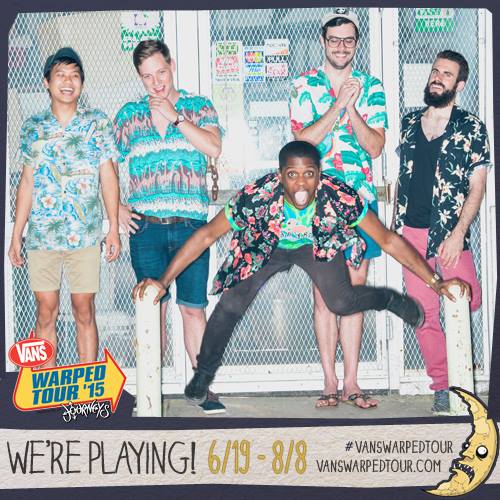 RYL: Let’s start from a song we love “A short little summer love song”, what inspired its lyrics?

BABY BABY: the summer baby! and love. and girls. and women. the heat. the BABES. wearing little clothes, or none at all. we just wanted to have fun with it and get people to sing along with us. try to make it infectious. like ebola. but you know, the good kind of ebola. exciting ebola. naked ebola. strip club ebola.

RYL: Great news! This summer you will play at the Warped Tour!! What do you expect from it?

BABY BABY: lots of sweat. so much sweat. like… my body is going to be caked in sweat for days. can you imagine the smell? its gonna be stanky. god there better be a shower.

I also expect a lot of blisters, bandages and bankruptcy. so if you’re reading this, please come out and see our show! we’re gonna need some people there so we’re not playing in front empty parking lot every show haha.

RYL: Your last album is titled “BIG BOY BALLER CLUB”, Is there a common “theme” among the lyrics of your songs?

BABY BABY: yeah son. its all about being in the big boy baller club. how do you get in the club? you be yourself. you like us, we like you. you like those losers over there? that’s cool. we won’t judge, we’re losers too.

What I’m saying is, you can probably relate to some of these lyrics you know. it aint about popping champagne and driving around in tinted 40inch rimmed benz with us. its about hanging with your friends and drinking a beer.

RYL:  Tell us everything about the song “Keep On Dancing”….which of its verses you like the most?

BABY BABY:HAHA. I got you. “I ain’t never had no money I don’t drive in limousines. We got all the love we need so above all things we just keep on dancing.” BOOM. see how I tied it into the last question?

BABY BABY: first I take a sip of portante (this is a very rare and exquisite french wine that not many people have ever even heard of before). after that, i’ll look at the moon for a couple hours, pondering the meaning of life and then after that, i’ll have passionate  sex to clear the mind.

When all is said and done, i’ll make a sandwich because I built up an appetite. then, at the last minute, while I’m in the studio about to record vocals, I’ll write them there. record in 3.. 2.. 1….    thats when the magic happens baby.

RYL: Which is your favorite verse ever written for a rnr song?

BABY BABY:”Put some Grant on it! Give the drummer some!” I just wrote this 10 minutes ago and its going on our new song “Teach You How to Dance”.

RYL: Do you remember the day you wrote “Take me Home” what inspired its lyrics?

BABY BABY: Honestly I don’t remember. but I can only assume I wanted a girl to take me home cause… you know. that shit is awesome. I highly recommend you try it.

BABY BABY: first off, I would take that dollar and I would start up a pyramid scheme. then I promise people that if they invest in my business, I would give them double back on whatever they make. thing is I’m definitely lying to them but fuck it. once I raise my first million, I would cash out, put it all in foreign banks and move so some remote island where no one can find me. after that, I would buy the entire catalog of Itunes indefinitely so I would never have to purchase music again.

RYL: “Turnip” appears to be one of the fans favorite,  what inspired its verses?

BABY BABY:”I got a hungry hungry hippo and its right below my zipper!” this is inspired by the good old fashioned BJ.  🙂 you asked!