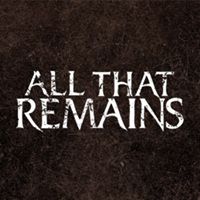 Madness, 8th studio album for ALL THAT REMAINS – interview with Philip Labonte

Today we interviewed Philip Labonte, singer of All That Remains, an American heavy metal band from Springfield, Massachusetts, formed in 1998.

In over fifteen years of career, they  have released eight studio albums and have sold over a million records worldwide.

we started our conversation asking him what was the biggest achievement of his career………..

There are quite a lot of moments that I remember and I’m proud of, but I cannot choose one in particular.

Definitively one of them is the release of “the fall of ideas”  when the record started to get attentions from the media and , In only  two weeks I listened for the first time, one of our song played at the radio.

Another one is when we released the first single of the album “A War you cannot win” and that song became number 1……. that was a big deal!

Our career has been extremely rewarding and I’m extremely grateful of the things I was able to do.

Thank you as well to our fans that are coming to our shows and are doing that since a long time.

What is the best achievement of your latest album “Madness”?

I would say the success that “The Thunder Rolls” has obtained………in one week it reached over 1M views, in two weeks it doubled them! I’m happy with the way the song came out it is something I’m really proud of.

How do you, usually, write the lyrics of your songs?

Historically we have been a very guitar-riff driven band, but in Madness we wanted to do the things differently.

First we started to write lyrics, melodies and vocal ideas,  then we would have sent the material to the rest of the guys of the band in studio in order for them to write a riff around this chord progression.

Tell us your favorite lyric of the album….

I really like “Far from home” because it is about my dad that passed away some years ago and I’m also very proud of “Never Sorry”… I like its defiant tone!

The best lyric you have ever written?

Some of my favorite stuff probably comes out from the “Overcome” record,

I was really proud of “Two Weeks”, its chorus was really good, very descriptive

Another song could be “What about nothing”

What Inspired the lyrics of “Halo”

this song was inspired by the fact that you don’t need other people approval.

nobody needs to tell you if you are doing a good job or the right thing.

Are you going on tour soon?

Yes, in September we will be touring with Falling In Reverse and we have another tour lined up after that (not announced yet)

After that, at the beginning of next year, we will be touring outside US, in Australia, Japan and Europe

Do you remember the day you wrote “Nothing I can do”?

I don’t remember exactly the day, but I know for sure that we were in the studio recording the new album.

Tell us your favorite song of all time….

One of my favorite songs is “Hook in Mouth” of Megadeth part of great the album “So Far, So Good, So What”

It sounded pretty cool, back in the 80’s there were a lot of people trying to censor what you can say and what you can or cannot put in a song…….

The chorus they come up with was very brilliant!

Why you did a cover of The Thunder Rolls (by Garth Brooks)?

When I was young I loved rock while my mother loved country music and The Thunder Rolls was a song that both of us liked.

I believe this is one of the best songs of Garth and I tried to have the band in to the idea of doing this for a while and finally I managed to get them on board!